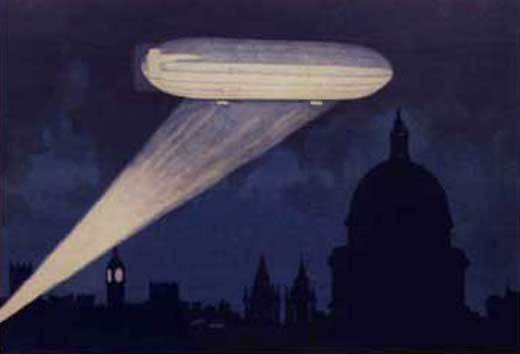 WAR COMES TO THE HOME FRONT

Late on the night of the 31st May 1915, residents in Stoke Newington were suddenly startled by the sight of Zeppelin drifting across the sky above them.

Moments later, railway clerk Albert Lovell and his family, were jarred from their slumbers when an incendiary bomb smashed through their roof and set fire to the upper floor of their house at 16 Alkham Road.

The bewildered Lovells were unhurt and were able to escape into the street to await the arrival of the firebrigade who quickly extinguished the blaze.

Soon afterwards, in Hoxton, a Mr. C. Smith was awoken by what he later described as "a terrible rushing of wind." It was followed by agitated cries of " Fire" and "the Germans are here."

Marshaling his family down into the basement, Mr. Smith headed outside to find that the neighbouring home of Mr. and Mrs. Samuel Leggatt and their five children was ablaze.

Inside the inferno, Mr. Leggatt battled through the flames to reach his children's room and, with the help of his neighbours, managed to pull four of them to safety. 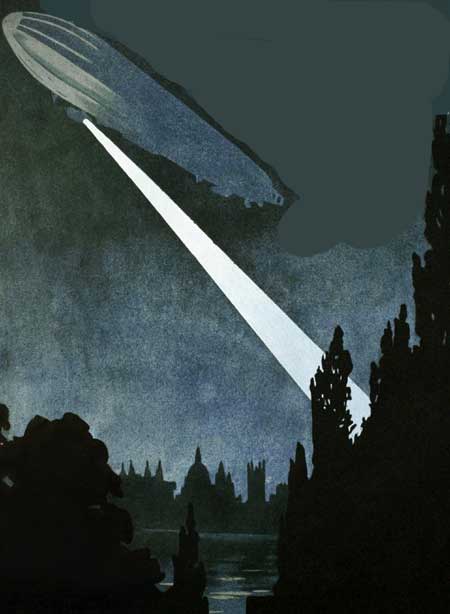 Tragically, in the ensuing confusion, Mr. and Mrs Leggatt believed that the neighbours had rescued their youngest child, three-year-old Elsie and were devastated when a policemen later discovered her charred body beneath the bed where she had crawled to hide.

Little Elsie Leggatt was one of the first London victims of a new type of warfare, one that extended the arena of battle to the home front, bringing with it the horror of indiscriminate bombing from above to the shocked and terrified men, women and children of London. As a popular refrain put it "there are no civilians now, we are all soldiers."

Between May 1915 and October 1917, Londoners endured nine similar bombing raids and since, initially, the authorities had yet to develop adequate defences against this new danger, there was little the people of London could do, other than hold their collective breaths and pray.

DEATH AND DESTRUCTION RAINS DOWN

And thus our World War One Walking Tour sets off to follow the trail of destruction wrought by the bombs that came raining down on the Capital throughout the dark nights of World War One.

Using first hand accounts from those who endured the terror, the walk provides a vivid insight into the mindset of the people who now found themselves in the vanguard of a determined German attempt to demoralise them and thus gain the upper hand in the escalating crisis.

Having set the scene for what it was like to live in London as the First World War progressed - and people faced up to the uncomfortable, yet palpable, truth that, contrary to the assurances they had been give, it most certainly hadn't been over by Christmas - we join the Capital's residents on the evening of the 8th September 1915 as German Army Airship L13, commanded by Kptlt Heinrich Mathy, drifts across the night sky 8500 feet above the city.

Reducing his speed to 37 miles per hour, he released a series of incendiary bombs onto the leafy squares of Bloomsbury.

Our walk sets off to follow this night predator as it drifts over the streets we will be walking through dropping more incendiaries in its wake.

Arriving in Queen's Square, we pause at the spot where the first high explosive bomb of the night landed, the resultant blast from which blew out the windows of the hospital buildings that still surround the Square today, though, mercifully, nobody was killed.

You will hear witness accounts describing the damage inflicted on the surroundings and be able to photograph, if you wish, the somewhat weathered plaque that now marks the spot where the bomb exploded.

BERTRAND RUSSELL ASKS WHAT IS WAR GOOD FOR?

Heading across Queen's Square, we follow the Zeppelin's trail as it headed across Holborn, dropping more incendiaries and bombs as it went.

In Red Lion Square we pause alongside a bust of Bertrand Russell, a noted Conscientious Objector, where we will discuss the fact that there were those who simply didn't believe in the War and outline some of the punishments meted out to them.

Continuing along a narrow passage, we emerge alongside the Dolphin Pub outside which the Zeppelin dropped another high explosive bomb. 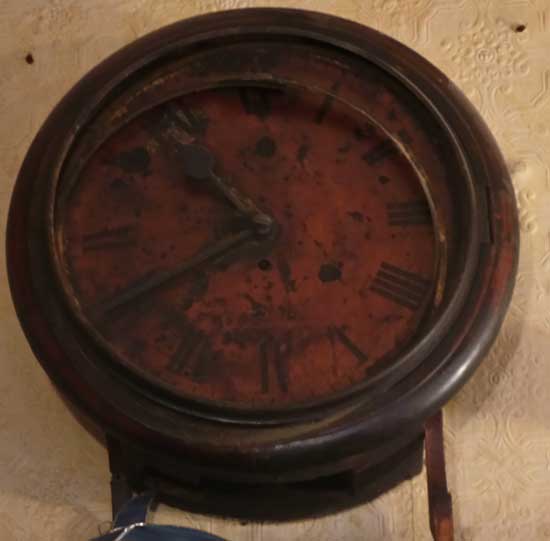 It exploded in the street, collapsing the pub's front and killing three men, one of whom was standing in the doorway of the pub.

And, there still exists a chilling reminder of this particular explosion.

The Dolphin's clock was dragged from the rubble, its hands frozen at 10.40pm, the exact moment when death rained down from on high, and that clock, battered and scarred, still hangs on the wall inside as an eerie survivor from that long ago night.

Indeed, you will catch a glimpse of it through the pub's windows as we stand in the street outside and picture the huge airship drifting across the London sky leaving a trail of death and destruction in its menacing wake.

Continuing our pursuit of L13, we break our journey by considering other aspects of the First World War.

Why, for example, could buying somebody a drink in a pub land you in serious trouble?

What was the effect of the imposed blackout on the people of London?

How did the Zeppelin crews themselves feel about bombing innocent civilians, many of them women and children?

Where did the majority of the citizens shelter as the bombs rained down on London?

Which workers found it easier to travel around London on roller skates?

You will learn the answers to these questions, and many more besides, as you wend your way through the streets in which those long ago Londoners faced up to the horror of "death from above"

The Carnage inflicted on the citizens of London was bad enough, but the horrors endured by the young men who were fighting in the First World War were beyond dreadful. 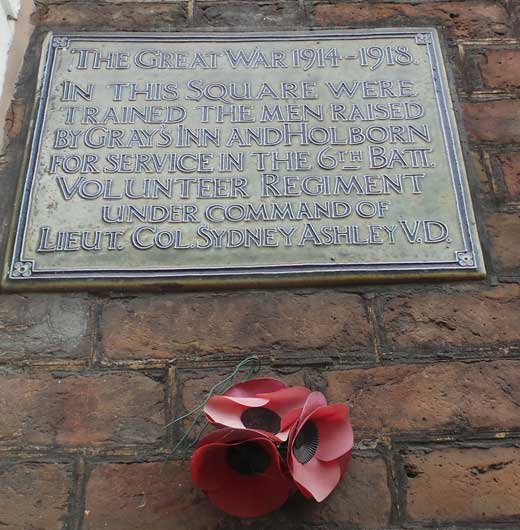 Our next location serves as a poignant reminder of these brave young men as we arrive at a square where some of them were trained before heading off to the trenches from which, in many cases, they would never return.

Standing alongside a memorial to them, we will discuss the recruitment process and remember the sacrifice they made.

It is a truly eerie moment when we pause and picture them marching across this square, full of courage, hope and a resolve to protect their loved ones and their country.

BACK ON THE TRAIL OF L13

We rejoin the Zeppelin as it drops another high explosive bomb on a tenement block where is kills three children and injures 25 adults. 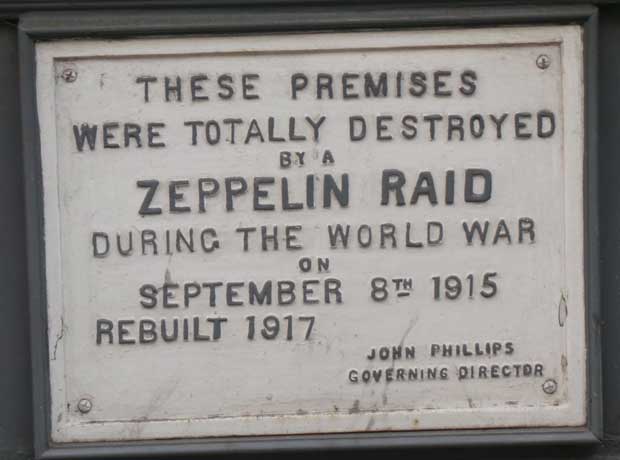 As the people in the streets below cowered beneath whatever shelter they could find, more bombs fell on Hatton Garden and Farringdon Road, demolishing several further buildings.

Our walk then follows L13 as it drifted across the valley of the River Fleet and passed over Smithfield Market to enter the air space over the City of London itself.

Here, Kapitanleutnant Mathy prepared to deliver his coup de grace of the night.

Amongst his cargo of bombs Mathy carried a massive 660 pounder, which he called his "Love Gift."

As he flew over St Bartholomew's Hospital he released this behemoth of a bomb, which crashed into Bartholomew Close and exploded with such force that it tore an eight foot crater out of the ground, flattening all the buildings in the immediate vicinity. 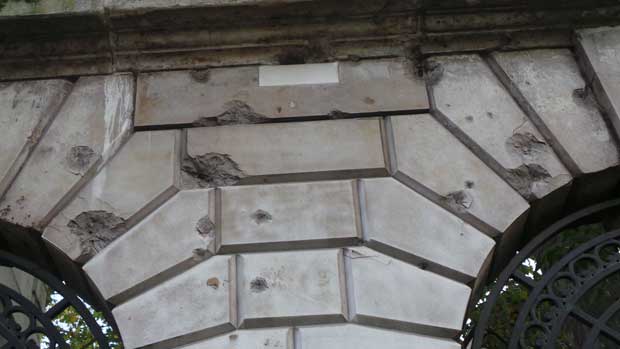 The sheer destructive force of the impact was dramatically captured by Mathy in his subsequent report on the raid when he described looking down from the control gondola of L13 and watching as "a whole cluster of lights vanished in its crater."

Indeed, the wall of St Bartholomew's Hospital is still scarred by the shrapnel damage it sustained, and we will pause to take in the sight of a riddled wall that still bears vivid testimony to the magnitude of the bomb that hit this area on that long ago night.

It makes for the perfect spot at which to end a walk that is gripping, fascinating and poignant in equal measure.

JOIN OUR WALK AND RELIVE THE TERROR

So, if you want to gain an insight into what it was like to live in London during the dark days of World War One.

If you want to follow the path of destruction left in its menacing wake by a new method of combat, one that brought the war to the Civilian population.

If you want to learn how Londoners coped with this new type of warfare - death from above.

Then join our First World War Walking Tour and relive, first hand, an eventful long ago night when the people of London were challenged to demonstrate their fortitude and resilience by an unwelcome and terrifying invader gliding silently across the vast darkness of the night sky above them.