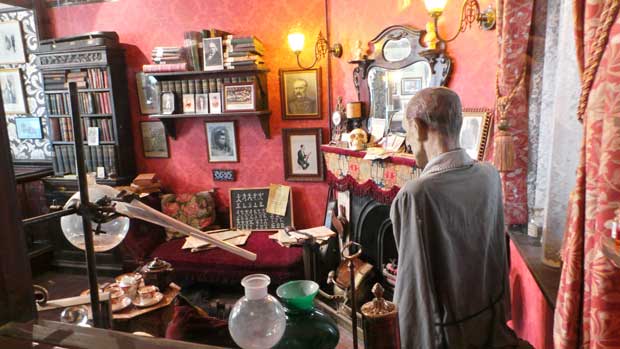 IN THE FOOTSTEPS OF HOLMES AND WATSON

London in the late 19th and early 20th Centuries was home to both Sir Arthur Conan Doyle and his most famous creation Sherlock Holmes.

It was in the streets of the Metropolis that Holmes – accompanied, of course, by his faithful sidekick, Dr. John H. Watson – pitted his wits against some of literature’s most dastardly villains and pondered some of its most baffling cases.

The highways and byways of London are as integral a feature of Holmes and Watson’s adventures as are the main characters themselves, and no story would be complete without a brisk stroll, or knuckle-clenching carriage chase, through the fog enshrouded thoroughfares of the Victorian or Edwardian Metropolis.

So, come with us on a journey of discovery that follows in the footsteps of Holmes and Watson through the alleyways and courtyards of an area that features in more of their adventures than any other part of London.

A Great Start To A Great Tour

Trafalgar Square, where our perambulation begins, makes the perfect location from which to set out to explore the streets of Holmes and Watson’s London.

The Square’s layout is still much as it was in Holmes and Watson’s day and many of its features would still be recognisable to them.

It is easy to picture them clattering past in a four-wheeler, heading to a meeting with Inspector Lestrade, looking forward to an evening at the opera, or en route to enjoy “something nutritious” at Simpson’s on Strand.

Misty Splotches Upon The Slimy Pavement

Having pondered the frequency with which Holmes and Watson would have passed the spot on which we start, the tour heads along Strand where, according to Watson, “…the lamps were but misty splotches of diffused light which threw a feeble circular glimmer upon the slimy pavement.” High praise indeed!

It is at a private hotel on Strand, in the first Sherlock Holmes story A Study In Scarlet, that we first meet with Watson who, having been pensioned out of the army, is leading a “comfortless, meaningless existence” in London – which he flatteringly describes as “…that great cesspool into which all the loungers and idlers of the Empire are irresistibly drained.”

The Hound of The Baskerville’s

Ducking down a tiny side street, we find ourselves gazing upon a row of sturdy 18th century properties, at one of which the ill-intentioned Stapleton lodged at the beginning of Holmes’s most famous adventure The Hound of the Baskervilles.

A Close Shave For The Last Of The Baskerville’s

A quick turn through a narrow alleyway, and we arrive at the location where the game is, quite literally, afoot, as Stapleton’s intended prey, Sir Henry Baskerville – who has only recently inherited the Baskerville fortune, along with the curse – is somewhat perturbed to find that one of his new tan boots has been stolen.

What fiendish plot could possibly lie behind this theft?

Fortunately, Holmes is on hand to prevent an arachnophobic encounter from bringing about the premature demise of the last of the Baskerville’s before he has even had chance to set a foot – tan-booted or otherwise – on the bleak sedges of Dartmoor!

Leaving Sir Henry to ponder his near miss, we join Holmes and Watson for an invigorating Turkish Bath at an establishment that they were wont to frequent on many an occasion.

Now, to be honest, it’s been a long time since the interior of this old building echoed with the banter of the steam room.

Indeed, there’s little here now to suggest that towel-clad Victorians ever came here to sweat out the acquired grime of the capital within the walls of what, at first glance, appears to be a mundanely unremarkable building.

But, you know the methods.

Turn an inquisitive glass on to a seemingly nondescript section of stonework and, suddenly, you see that which is often missed by the casual passer-by – the exquisitely ornate tile-work that belies the buildings more exotic past and its connection with Holmes and Watson.

Your Very Own Mystery

It’s time now to put your own powers of deduction and observation to the test as your guide leads you through a series of dark arches where one of Holmes’s mysteries will be placed before you.

We won’t tell you which one – it wouldn’t be a mystery if we did – but, suffice it to say, a set of clues from one of Holmes’s adventures will be laid before you and, as you pick your way through a series of historic back streets, you will be called upon to observe and deduce in order to arrive at a solution to the mystery of the……….

The Man Who Murdered Sherlock Holmes

Having, hopefully, solved this tantalising teaser, we stroll onward and, having passed the hotel to which Holmes once lured the secret agent Hugo Oberstein in The Adventure of the Bruce-Partington Plans, we get to grips, so to speak, with the man who, more than any other, wanted to see Holmes dead.

It is a bizarre fact that Conan Doyle felt a certain amount of disdain for his meal ticket detective whom, he famously once observed, “…keeps my mind from better things.”

Indeed, at the height of Holmes’s popularity, in 1893, Conan Doyle decided that the time had come to be rid of Holmes once and for all, and he duly sent him plunging to a watery grave in the foaming depths of the Reichenbach Falls.

What is even more bizarre is the reaction of the public at large to the news of Holmes’s demise!

You will hear how some people wore black armbands to mourn the tragic passing of the great detective and you will learn how Conan Doyle found himself inundated with pleading and threatening letters expressing such anguished and angry sentiments as “you brute, how could you do such a thing?”

Having ourselves mourned the demise of the great detective, we make our way to the theatre at which Conan Doyle risked his personal fortune to stage a play, based on one of his historical novels, which he always considered to be vastly superior to his Holmes stories.

However, for reasons we’ll go into on the tour, the public stayed away in their droves! With the debts mounting, he decided there was only one person who could bail him out of the predicament he found himself in and thus he brought Holmes to the London stage.

True to form, Holmes saved the day as the public flocked to watch him tread the boards in a real creeper of a play that, not only recouped Doyle’s losses, but also turned a handsome profit to boot!

The final section of the tour around Sherlock Holmes’s London takes us through some truly atmospheric back alleyways to the stand outside the restaurant at which Holmes and Watson liked to dine; the site of the offices of The Strand Magazine, in which many of Holmes’s adventures first appeared; and the theatre at which a famous American actor, having enquired of Conan Doyle “may I marry Holmes?”, brought the great sleuth to the London stage and, in so doing, gave us several of the props and characteristics that later generations would come most associate with Sherlock Holmes.

But, the Sherlock Holmes tour is not just a ramble through the adventures of Holmes and Watson. It is also crammed full of interesting facts about the world’s most famous, and instantly recognisable, consulting detective, his London and about his creator Arthur Conan Doyle.

You will, for example, learn about the strikingly handsome Victorian illustrator whose face, thanks to a strange case of mistaken identity, became the image for Holmes himself.

You’ll also discover why it was that several of the London streets mentioned in the very first Holmes story A Study In Scarlet are, in fact, located in Edinburgh!

Your guide will also reveal the identities of the two Edinburgh doctors whose personal traits went into the creation of the character of the world’s greatest ever consulting detective.

So, join us in the little changed thoroughfares of the Victorian and Edwardian Metropolis and follow in the footsteps of Homes, Watson and Conan Doyle on a journey through the London of Sherlock Holmes.

At the base of Nelson's Column
in Trafalgar Square.

The tour ends opposite
The Lyceum Theatre on Wellington Street.