GHOSTS OF THE OLD CITY 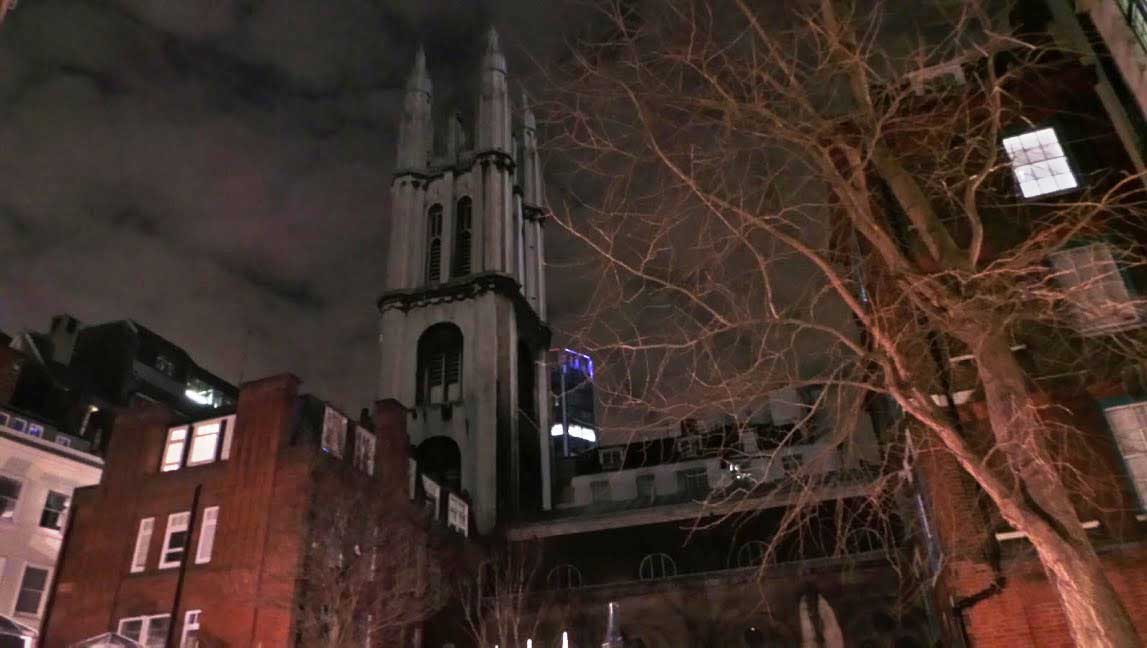 Night falls, its dark shadows drape themselves across the old alleyways, the narrow passageways, the timeworn courtyards and the tumbledown churchyards that nestle at the heart of the old City of London.

The past stirs and, as it does, its icy touch rouses the spirits of long dead citizens who, having woken from their slumbers, return to the old City to walk those places that their living selves knew so well.

And, right on cue, our London haunted walk sets off to explore one of the City’s oldest and most historic quarters to hunt for the ghosts that roam its darkest recesses.

There can be few more dramatic departure points from which to set off on a perambulation of the haunted Necropolis than Bank Underground Station.

Firstly, you are standing in front of the Royal Exchange, the splendid facade of which rises majestically before you the moment you step out of the underground station.

Secondly, the very depths of the station are home to a resident something that can cause the toughest and most robust of maintenance workers to turn heel and race from its tunnels.

The chill of its malevolence is long attested to, but what it actually is remains a secret that only the station’s walls are privy to, and they’re not telling!

Your guide will proffer a plausible explanation as to what long ago tragedy lies behind the haunting, but, when all is said and done, it’s just a theory, whereas it, whatever it might be, is all too real.

Beware The Icy Blast Of The Devil’s Breath

From this chilling start, we set off to encounter the first narrow passageway of an area that is crammed with them. This one, however, is the sinister abode of an entity so fearsome, so menacing in its malevolence, that those who have felt its icy breath upon their faces, or even on the backs of their necks, have oft referred to the effect as like being touched by “the devil’s breath”.

Marley Was Dead To Begin With

From here you’ll venture into a time-warp corner of London to seek out alleyways and courtyards that have changed so little, if indeed they have changed at all, since a long ago day in 1843 when Charles Dickens recognised them as providing the perfect setting for the beginning of his most ghostly of ghostly tales A Christmas Carol.

Standing in this warren of back alleyways – each one a genuine throw back to a bygone age – you will be asked to imagine yourself travelling back in time to a long ago Christmas Eve of “… cold, bleak, biting weather: foggy withal…” the fog so dense that, although the court you will be standing in might be of the narrowest, the surrounding buildings will seem like mere phantoms.

The Tooth Is Out There!

Having snaked your way through the twists and turns of the neighbourhood’s secret courtyards and hidden passageways, you will find yourself stepping through a creaking iron gate to stand in a spooky old churchyard where Richard will regale you with a gruesome tale concerning the theft of a set of perfect teeth by the bodysnatchers and the ghostly activity that their nefarious crime roused.

If These Walls Could Talk

Plunging further and further into the nebulous hinterland of the City of Shadows, the tour dips in and out of old alleyways and historic streets where time itself appears to be suspended.

It passes the towers of ancient churches that brood like silent guardians over their surrounding churchyards, protecting them from the advances of the encroaching modern City.

Oh, the tales the ancient walls that line your way could tell if only they could speak!

Fear not though fearless ghost hunters, for your guide is on hand to tease those tales from the cold stone as he regales you with as varied a mix of spectral goings-on as you could ever wish to endure on a walk around haunted London.

You will learn of the spectral waiter who refuses to let a little thing like death keep him from attending to his duties.

You will stand on the sinister corner where a nocturnal act of infamy has left a troubled soul stranded at the point of his demise for nigh on 100 years.

You will pause outside one of the City’s most important institutions, where the woman in black maintains her lonely vigil and where she may enquire of you if you have seen her brother, much as she has been enquiring of passers-by for the last 200 years.

Indeed, You will be bombarded with truly creepy ghostly tales that are guaranteed to chill your blood and send shivers racing down your spine. In addition, there will be several surprises and shocks that will enhance the spook-factor on the tour!

Further Into The City of Dreadful Night

The tour then weaves its wicked way into an old, old courtyard where you will hear one of Richard’s favourite ghost stories.

The backcloth of the location at which Richard will act out this story cannot be bettered.

Indeed, tour participants often gasp in amazement when they see the old courtyard and they are genuinely surprised that it exists at all, since there is no hint in the modern streets that surround it to suggest that it is there!

But this is a walk comprised of surprises such as this and, once you turn that corner, and set foot on its ancient cobblestones, the 21st century falls away and the stage is set for a theatrical piece of ghost story telling extraordinaire!

Richard has been regaling people with this ghost story for nigh on 31 years and has had plenty of time to develop a true classic of haunted London’s spectral landscape.

Put simply, the art of ghost story telling doesn’t come better than what you will hear at a location that could, so easily, have been specially built as a backdrop for the telling of this tale.

Prepare to be spooked and amused in equal measure as one of 19th century London’s strangest sequence of unfortunate events unfolds before you!

Grim-visaged night will have well and truly taken hold as, by way of another sequence of ancient alleyways, you make your way to a visual highlight of the night, the magnificent façade of the City of London’s medieval palace.

Here, gazing up at the building, inside which one of England’s most tragic ghostly figures, Lady Jane Grey, was sentenced to death, you really will feel like you’ve slipped back in time. Indeed, so alive (if that is the correct term!) is this spot with memories of bygone London that several people on the tour have picked up on ethereal echoes of a long ago act of infamy that still lingers around the spot on which you are standing. Will you?

Will I See Any Ghosts?

Well, obviously we can’t guarantee it. Ghosts are their own masters and mistresses and they come and go as they choose!

But several people who have joined Richard’s London Ghost tour have encountered some decidedly odd things. Orbs and ghostly voices are frequent occurrences, for example.

Then there’s our final location of the night, the City’s most paranormally active building bar none, and the location at which many participants on the ghost walk have managed to photograph what could possibly be evidence of paranormal activity.

You will, most certainly, be given the opportunity to do likewise, after all, what better souvenir could you wish from a haunted London tour than to go home with your very own phantom on film?

Amazingly, people capture a certain something on there photographs on an almost weekly basis at this location.

A Chilling Night Of Masterful Storytelling

So join London’s undisputed master of the macabre for an eerie and spine-tingling journey through the alleyways and shadows of old London where you will enjoy storytelling that is so masterful that even the dead have been known to drop by and listen!

The Haunted London Tour can be booked as a private tour for your office social, tour group, or even as an outing with a difference for a group of friends or relatives.