MANY HAPPY RETURNS TO AND IN MEMORIAM OF THE BARD 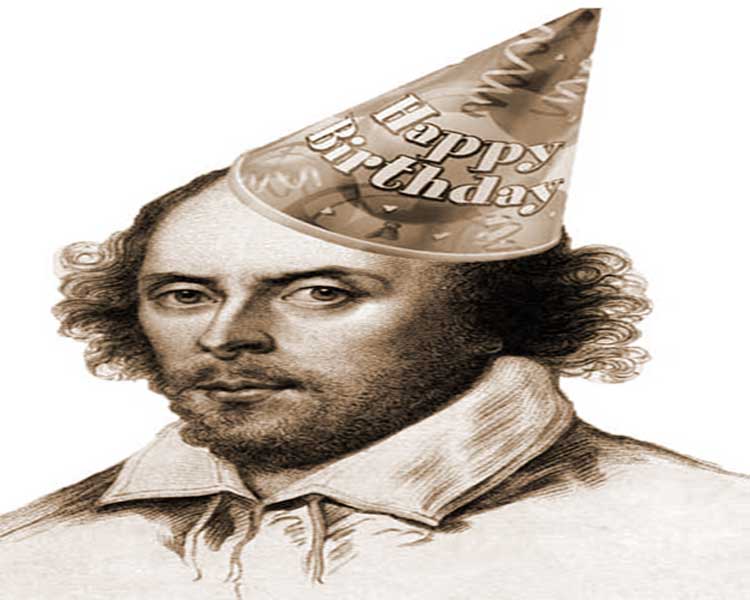 April 2018 sees William Shakespeare's 454th birthday and, to celebrate such a landmark occasion, Richard Jones will be leading a celebratory walk, in the course of which participants will be able to explore the streets and places that loomed large throughout Shakespeare's life in London.

The honest truth, however, is that we don't know for certain what day Shakespeare was actually born on, since it was the Christening, as opposed to the actual birth, that tended to be recorded in Elizabethan times.

But, since he was Christened on 26th April 1564, wiser minds than ours have mulled over the issue and have settled on April the 23rd as the accepted day on which the infant Shakespeare entered this World and set about mewling and puking in the nurse's arms with all the gusto that a new born Bard-to-be - or as may well have happened, as you will hear on the tour, Bard-not-to-be - could muster!

THE ANNIVERSARY OF HIS DEATH

So, for 2018, Richard's "Bard's Birthday Walk will take place on Sunday 22nd April, and will explore an area that Shakespeare would have known extremely well.

But the narrative will be tinged with sadness at the knowledge that it was a day later, on April 23rd 1616, that one of the most prolific mind's and pen's in the history of English literature shuffled off this mortal coil and slipped away into mere oblivion

WALK THE STREETS OF SHAKESPEARE'S LONDON

Shakespeare might have been born in Stratford-upon-Avon, but the Shakespeare that we know - the Shakespeare whose words have brought joy to millions, if not billions, of people the World over - was, very much, a man of London.

He lived in and walked through the very streets you will walk through; he knew every twist and turn intimately; and he drew inspiration from the places and the people that he encountered on a daily basis.

He even drank and caroused in some of the historic taverns you will encounter; and he won the respect of just about everybody with whom he came into contact.

That's the Shakespeare you will get to know on this special walk, as you delve into the hidden alleyways and tucked away courtyards where remnants of his London are awaiting your discovery.

So, if you are ready to allow your imagination to travel back across the ages, then let the curtain rise on the William Shakespeare Birthday Walking Tour around the historic streets of old London and let the revels commence.

ACT ONE, SCENE ONE 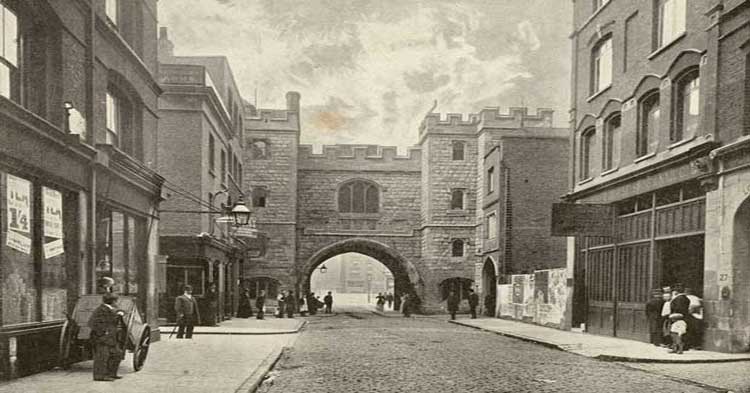 ENTER THE MASTER OF THE REVELS

The first act of what promises to be a truly memorable tour, is journey into the heart of the village of Clerkenwell to take a look at a medieval gate which, following the Dissolution of the Monasteries, became the office of the Master of the Revels, the Elizabethan censor no less, who would have had the task of licensing Shakespeare's plays to ensure they complied with the rigid rules laid down by the Tudor regime.

Can there be a better start to a wander through the Bard's London than a structure he would have actually gazed upon?

Richard will conjure up images of Shakespeare traipsing through the surrounding streets en route for this medieval landmark, his latest play clutched securely under his arm, wondering if Sir Edmund Tilney - the said master of Said revels - would grant him the all important permission that would allow the play to be staged.

As the lights dim on the first act of the performance, you will venture into the historical streets that surround the gate. Streets that were, in Shakespeare's day notorious for their brothels and gambling dens, and which, as a result, have some blushingly colourful tales to tell.

These streets will deliver us to another true surprise, an Elizabethan Mansion House - it has the distinction of being London's oldest surviving Tudor town house - where you will hear all about how Shakespeare and his ilk would try to secure the patronage of the nobles of the realm in order to ensure themselves trouble free performances.

Houses such as this could also prove a useful source of income when the theatres were closed, as the aristocracy were always on the lookout for riveting entertainment to keep them from growing bored or to impress their visitors.

And now, the surprises come thick and fast.

We delve into a warren of time-locked backstreets that still maintain their medieval layout.

Narrow, twisting, thoroughfares in which you almost expect Shakespeare, Ben Jonson, Christopher Marlowe or any other citizen of Elizabethan London to come strolling out of the wings. 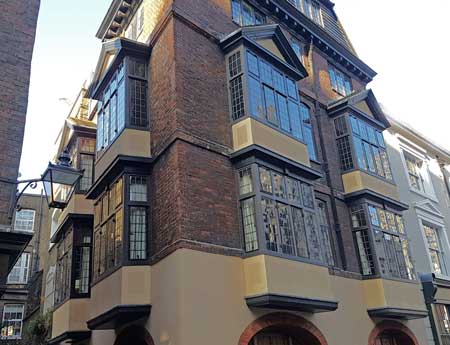 More impressive still, are the number of Shakespearean associations that are still there to be seen, if you take the trouble to notice them.

How about the easily missed remains of the old medieval wall, tucked away in a bucolic garden that few casual visitors chance upon?

How about an old house - it actually has the distinction of being the oldest inhabited dwelling in the City of London - that Shakespeare and his friend and rival, Ben Jonson, would both have known?

How about the old church that actually featured in the film Shakespeare in Love?

What is certain is that, by the time that you emerge from the warren of backstreets, you will have gained a terrific insight of, not just everyday life in Elizabethan London, but also an intimate knowledge of Shakespeare the man.

THE GREAT FIRE OF LONDON

But, there is more to come, much more.

The walk will pick its way across what was once the open expanse of the "Smooth Field", where you will hear tales of the bloodthirsty pursuits that once entertained the crowds who gathered here.

Onwards, passing the only outdoor statue of henry VIII in London, we make our way to the corner where the Great Fire of London burnt itself out in September 1666. Indeed, you'll even gaze up at the curious statue of the golden boy who commemorates the ending of the fire at the spot on which you will be standing!

Now, it has to be admitted, Shakespeare was long-dead when the conflagration destroyed the medieval City he had known so well, but the Lane on which it ended, at least in this quarter of the City, was once notorious as a place of ill-repute, and so we will picture what the surroundings would have been like when Shakespeare would have gazed upon them, and, no doubt, drawn bawdy inspiration from them!

Gripping stuff indeed, and one of the many anecdotes that you will hear on the tour that will bring Shakespeare - the man of flesh and blood - to vivid life.

And so our journey continues, as we encounter a church inside which a bizarre custom once began - indeed a custom so bizarre that it merited a mention in Macbeth.

Shakespeare would also, no doubt, have been shocked by the news that a 17th century nobleman had taken his own life by leaping to his death from the tower of the church. Indeed, the nobleman's suicide set in chain a series of tragic events that were, to say the least, Shakespearean in their complexity! 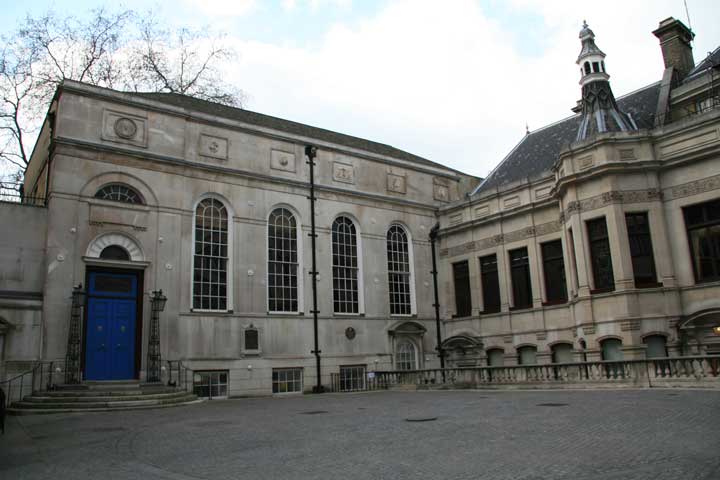 Moving on, we make our way into a series of historic locations, the very names of which are steeped in London's past.. Paternoster Square, Ave Maria Lane, Amen Corner, forsooth their names resonate with distant folk memories, remembering as they do an ecclesiastical past that is now - long passed.

It is with such memories that we arrive in a tucked away courtyard where you will gaze in wonder upon another glorious building, the magnificent Stationers' Hall.

Although we won't be going inside it, you will hear all about its connections with the Bard and, in so doing, you will gain a terrific understanding of just how important its role was to publishers and writers alike in days of yore.

You will also learn of its famed stained-glass window, which consists of a portrait of Shakespeare underneath which runs the apt inscription "He was not for an age but for all time". 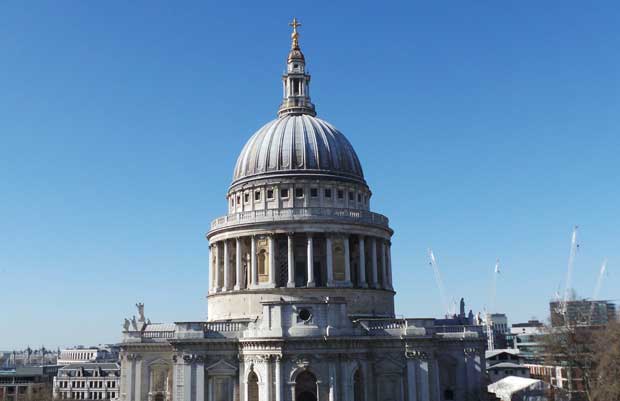 But, just as every good play required a grand finalé, so every walk needs a memorable finish and, from a Shakespearean perspective, we end on a truly high note.

For, just a few minutes walk from Stationers Hall is St Paul's Cathedral and we will crane our necks skyward to look up at the soaring majesty of this magnificent building.

As Richard will explain, this is not the Cathedral that William Shakespeare would have known, since, as with so much of his City, that one was lost to the flames of the Great Fire of London in 1666.

But, worry not, for the mark of a good walking tour guide is the ability to make you see again what is no longer there, and, to that end, Richard will paint a verbal picture of what the older foundation looked like when it dominated the London skyline, and, within moments, your minds eye will be filled with the vista of its commanding presence as you picture Shakespeare heading towards the booksellers and printers premises that then stood in the churchyard beside the Cathedral.

One of those printers, Richard Field, was an old friend of Shakespeare's from Stratford, and it was he who printed several of Shakespeare's early non-dramatic poems, so it makes for a truly memorable finalé to the Bard's birthday perambulation!

A TOUR PACKED FULL OF FACTS AND STORIES

In the course of your tour you will not only have heard some colourful tales and fascainting facts about the life and times of William Shakespeare, but you will also have heard about the highs and the lows of his eventful life and of his interactions and clashes with his fellow actors and playwrights.

In short, he will spring from the dry and dusty pages of academia to become a living, breathing man - resplendent with all the foibles, faults and facets that flesh is heir to.

And thus, the curtain descends upon the final moment of our Shakespeare Birthday Walk, as we contemplate the fact that, although we can't name for certain the exact date of Shakespeare's birth, we can say for certain that the day after the tour, April 23rd, marks the anniversary of the day on which his - not so - little life was rounded with the sleep of uninterrupted immortality.