A JOURNEY THROUGH 2,000 YEARS OF HISTORY 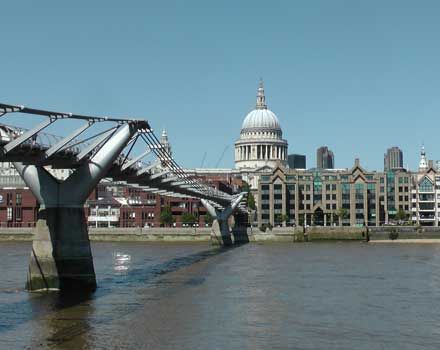 Uncover The Secrets of Hidden London

On this truly special walk you really will get beneath the skin of the City of London as you seek out some of its most amazing and secret places on a tour that, well and truly, has it all. Indeed, if you only have the time for one London walk then this is the one to take, it’s that good!

But, above all else you will enjoy a pleasant and informative stroll through 2,000 years of captivating history on a voyage of genuine discovery on which each corner turned will yield up a fresh surprise.

The Splendour of St Paul’s Cathedral

The walk begins, as many of Richard’s walks do, in front of St Paul’s Cathedral. There really is no better place to start a walk that is going to open your eyes to the many wonders of the City of London.

But you will have the opportunity to really see, as opposed to simply look at, St Paul’s as your guide conducts you on a visual exploration around its stunning exterior. What, at first glance, might seem like a relatively plain exterior will be viewed in a new light as your eyes dance over various decorative aspects that combine to make this such a magnificent and memorable edifice.

Wonders, to name just one, such as the phoenix that the Cathedral’s architect, Sir Christopher Wren, considered the perfect symbol of his masterpiece rising from the ashes of the old City of London.

Having soaked in the majesty of St Paul’s, we make our way through one of the old entrances to the City of London and, having paused to make the acquaintance of the Panyer Boy, we board a state of the art elevator to be whisked skywards to a viewing platform from whence we will be afforded one of the most stunning vistas imaginable.

Here, from our lofty perch, you will gaze out across the London skyline to catch tantalising glimpses of landmarks as diverse as the dome of St Paul’s Cathedral, the London Eye, the Shard and, if you look really carefully, Big Ben. There really are few viewpoints in London that can match this one.

A History Written in the Streets

Cheapside, Bread Street, Milk Street, Friday Street and Wood Street, each of them marinated in the events and the history of ages past, and each one brim full with tales and anecdotes to amaze and amuse you.

Having gorged on the veritable feast of history our journey through London's past serves up a true highlight as we pause outside London's medieval palace, the place from which the City has been governed for close on 600 eventful years. If it’s open, as it often is, we’ll even go inside to show you one of the City’s most magnificent and awe-inspiring interiors.

The Historic Hub of the City

The tour then makes its way to the City’s hub where you will be spoiled for choice as to what you should take in first!

Will it be the Mansion House, home of the Lord Mayor of London?

Will it be the spectacular Royal Exchange, the origins of which go back to the 16th Century?

Or will it be one of the impressive statues that loom over you, each one commemorating a famous figure who helped shape the fortunes of the City of London?

So as not to overwhelm you too much, your guide will ease the burden of choice by introducing your surroundings and regaling you with the history of each building and statue.

A Dickens of a Diversion

Then, it's off into another warren of tucked away alleyways to reach the spot where Charles Dickens set the memorable opening of A Christmas Carol.

Here we encounter an old hostelry at which Dickens dined and which he featured in Pickwick Papers.

It has changed so little since the days when Dickens knew it, that his descendants still pay it an annual visit to enjoy a hearty Christmas lunch, whilst remembering and paying homage to their famous ancestor.

The Great Fire's Trail of Destruction

The final section of the London Discovery Walk heads through the Victorian Capital's most beautiful market, one which Harry Potter fans will recognise as Diagon Alley, to arrive at the spot where the Great Fire of London began in 1666.

You will hear the full story of how the conflagration took hold in the City's eastern quarter and how its flames, fanned by the wind, raged through the narrow streets, leaving a trial of utter devastation in its wake.

Once you've heard how the old City was destroyed you will learn how a new City rose from the ashes and you will look at the golden ball of flame that tops the Monument that remembers the destruction of the City of London in 1666.

The story of the Great Fire really will make for a dramatic and exciting narrative with which to end your morning of fascinating discoveries.

So join Richard on a tour that is steeped in history, crammed full of intriguing and fascinating facts, and which will offer some truly visual, camera friendly moments.

After the tour you might even like to ascend the 311 stairs to the top of the Monument to the Great Fire of London to look down on the tour route and retrace your footsteps from on high!