OF THE WORLD AND FOR THE WORLD 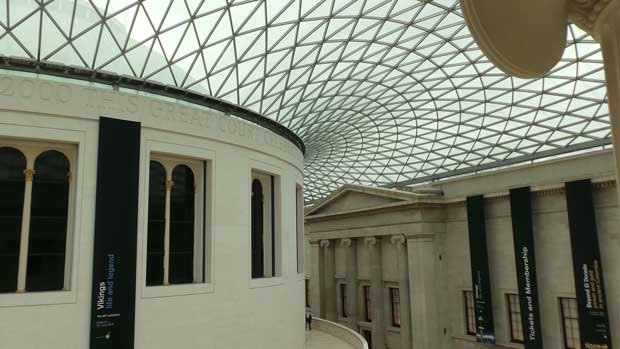 The British Museum is one of the World’s greatest museums. Its collection consists of over 6 million artefacts and, to make your way through its rooms, is to take a journey around the globe and a journey through time. Indeed, on a typical tour around the highlights of the British Museum you can see how Assyrian kings decorated their palaces; view statues of Ancient Egyptian Pharaohs; marvel at marble friezes of Greek gods; look longingly upon exquisite pieces of Roman silverware; and, if that isn’t enough to get your synapses tingling, you can also gaze in awe-inspired wonder at the Rosetta Stone, one of the most important artefacts in existence - and the key to unlocking the secrets of the hieroglyphs of ancient Egypt.

But, before you even begin your exploration of the collection, one of London’s true marvels awaits you. Look up the moment you arrive inside the British Museum’s Great Court and take in the breathtaking ceiling that spans it. It is made of steel and glass - 3,312 triangles of glass to be precise, each one slightly different in size due to the fact that the area it stretches over is something like 30 metres off-centre and therefore each pane of glass needed to be designed individually to fit! The ceiling was completed in the year 2000, at a cost £100 million, and 800 tons of glass went in to its construction. It covers a two-acre site, making it one of the largest covered public spaces in Europe.

The ceiling was designed by the architect Lord Norman Foster, arguably one of the country’s most important architects of recent years - certainly one of the most prolific. His work is stamped all over London and the chances are, even if you are not familiar with his name, you will have seen one of his other buildings or structures without realising it. If, for example, you have walked across the Millennium Bridge (and if not why not?) which spans the River Thames and connects St Paul's Cathedral to the Tate Modern art gallery, then you will have walked across one of his other designs. Perhaps you have seen the huge glass bullet shaped office building which we affectionately call "The Gherkin"? Well, again this was a Norman Foster design.

One of the things to notice when you enter the Great Court is that the temperature is very comfortable, which might come as a bit of a surprise given the amount of glass that stretches over it.Indeed, you’d expect there would be a greenhouse effect - heat trapped making the room boiling hot. In fact, in each triangle of glass there is a specifically designed coloured disc which absorbs the heat of the sun whilst allowing the light to penetrate. So the whole place is wonderfully light and bright and cool.

Origins Of The British Museum

The nucleus of the British Museum began in the year 1753 when a man by the name of Sir Hans Sloane sold his collection of artefacts from around the world to the British Parliament for the sum of £20,000. Sloane was a physician and a very high flying physician whose many illustrious patients included three monarchs, Queen Anne, George I and George II and one Lord Albermarle - British governor of Jamaica. It was, incidentally, during one of his visits to Jamaica that Sloane quite possibly invented hot chocolate when he ground up some cocoa beans and added milk and sugar then bringing back his recipe to this country and selling it to apothecaries.

Sir Hans Sloane loved to collect things and, thanks to his job and his studies, he was lucky enough to travel around the world visiting places that most people could only dream of. He began collecting things on his voyages - and it was this collection of manuscripts, prints, drawings, flora, fauna, medals, coins, seals, cameos and other curiosities that he bequeathed to the nation in 1753.

The museum opened to the public in 1759 and the collection was housed in a house that stood on the site of the current museum, Montagu House. The four-sided building that houses the collection today dates from the 1840′s.

At the centre of the Great Court is a brilliant white, circular structure, which now houses temporary exhibitions. For many years the British Museum was also the home to part of the British Library. In 1997 the Library moved to its brand new building about a half mile away. But for many years its Reading Room was located inside this circular structure. In the 19th Century it was one of the few heated public rooms in London and among the many notable people who came here regularly to read were Lenin, Charles Dickens, Oscar Wilde and Karl Marx, who visited every week for 30 years and quite possibly wrote his revolutionary Communist manifesto Das Kapital within the distinctive circular walls.

House Rules For Your Visit

Before you begin exploring the many treasure of the British Museum there are a few house rules that must be adhered to. Firstly, the use of mobile phones is forbidden within the galleries. Also, no eating or drinking is allowed. Unusually for a museum photographing the exhibits is permitted, but touching them is a strict no no!.

Aside from that it is a fantastic museum and you’ll really enjoy exploring it to your hearts content.