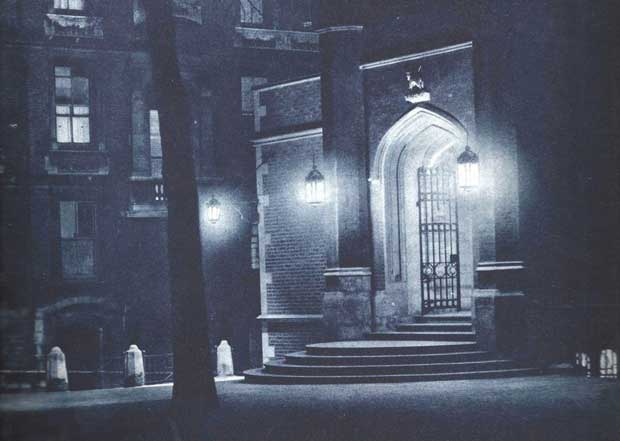 BEWARE OF THE SHADOWS

Are you feeling peckish? Could we tempt you to a mouth watering dish loathingly crafted by the redoubtable Mrs Lovett – a lady renowned for making the tastiest and tenderest meat pies ever to linger upon the palates of hungry Londoners?

Perhaps you’d enjoy a shave before you venture across the threshold of her Bell Yard pie shop?

No problem. Step this way and let us introduce you to the man who was the provider of the secret ingredient that gave Mrs Lovett’s pies the extra edge in the taste stakes (or should that be steaks?).

Take a seat and make yourself comfortable, for you’re about to learn what that elusive ingredient was.

All The Ingredients For A Great Ghost Tour

Only kidding, we’re not really going to turn you into meat pies, we’re far too nice for that and, anyway, imagine the reviews on Tripadvisor if that was indeed our goal.

Instead, we’re going to take a dash of sinister history, a jot of London folklore, a sprinkling of spooky tales, a light dusting of dastardly villains and blend them together to create a veritable feast of a ghost walk that will prove both historical and hysterical in equal measure.

But, it is the guide who makes, or breaks a ghost tour, and for the Sweeney Todd Ghost Walk – as with all our haunted London tours – you will be taken around by none other than London’s Master of the Macabre – author broadcaster, and ghost story teller par excellence - Richard Jones.

In Richard’s company you will not only hear some great, and creepy, tales of the supernatural, but you will also be brought up to date with all the most recent paranormal activity in the area.

The Black Dog of Newgate and the Ghostly Bell

Beginning on the steps of St Paul’s Cathedral, the tour heads straight for a secluded courtyard where you will be asked to keep a keen eye peeled for the ferocious form of the demon Black Dog of Newgate.

Having hunted down this hideous hound of hell, the tour snakes its way through a delightful medley of medieval streets – several of them haunted – to seek out the tower from which a ghostly bell has been known to toll a mourning knell whenever the vicar of a far away parish dies.

One of London’s Most Atmospheric Enclaves

Then, by way of several old churchyards and creepy alleyways, we find our way into a truly atmospheric enclave that is quite unlike any other part of London.

Its courtyards and squares have changed little, if at all, in over two hundred years.

Your footsteps will echo across time-worn flagstones and, for much of the tour, your way will be illuminated by the dull glow of gas lamp lighting.

Can there be a more atmospheric companion to light your way on a tour of haunted London?

Needless to say, ghosts aplenty lurk in the dark recesses of this enchanted throwback to a bygone age, and your guide will introduce you to some of the most tragic and evil figures from London’s past.

A Hanging Judge And Jack The Ripper

Indeed, the ghosts that you will encounter on your Sweeney Todd London Ghost Walk are a truly eclectic bunch that date from all ages and belong to all classes.

You’ll hear of a ghostly barge that drifts its melancholy way over the dark waters of the River Thames carrying the mournful spectre of a wronged Queen.

You’ll delve into a silent courtyard to hunt for the troubled wraith of the infamous hanging judge.

You’ll stand beside a sturdy round church built by the Knights Templars in 1185, and you’ll gaze upon the tombstones beneath which these long ago soldiers of Christ now rest.

You’ll see the grand old building inside which Elizabeth 1st sealed the death warrant of Mary Queen of Scots.

You’ll even gaze upon the chambers where a major suspect for the mantle of Jack the Ripper may have hidden after his ghastly murders in 1888.

Where Fearless Policemen Fear To Tread

And, if all the aforementioned gas lit horrors have filled you with a morbid curiosity and a desire to learn more, then how about an encounter with a warren of sinister alleyways in which several local police officers have encountered “something” so terrifying that they are loathe to venture into them alone at night and which really do possess a truly menacing ambience.

But, it is the story of Sweeney Todd and his wicked accomplice Mrs Lovett that will grip and repulse you in equal measure.

First, you’ll visit the site of Mrs Lovett’s celebrated pie shop where loyal customers sat down to sate their appetites on her mouth-watering and delicious delicacies, blissfully oblivious to the provenance of their main ingredient.

Next, you’ll see the creepy old church beneath which ran the tunnel that connected Sweeney Todd’s shop to Mrs Lovett’s premises and through which he would drag his prime cuts of perished person!

Then, you’ll step into a dark and sinister court to stand on the very spot where the demon barber conducted his barbarous business and slashed his way into the realm of London legend.

You’ll even hear of a surprising connection between Sweeney Todd and Charles Dickens, one that might well put you off sausages for life!

A Cosy Pub To End In

The walk will end at an historic haunted pub where you can, if you wish, purchase food and where we particularly recommend the meat pies!

So, if you want to enjoy a ghost walk that ventures well away from the well-trodden tourist routes and which explores an area that was just made for ghost hunting, then join London’s Master of the Macabre, for a journey through the gas lit shadows of the haunted Necropolis and encounter first hand those places where evil lurks and ghosts have been seen.

In Front of St Paul's Cathedral
By the White Statue of Queen Anne.

The Sweeney Todd Ghost Walk can be booked as a private tour for your office social, tour group, or even as an outing with a difference for a group of friends or relatives.

The only restriction is that the memorial garden, that is one of the true highlights of the walk, closes its gates at 7pm so you would need to start before 5.45pm if you want to follow the route described here.

However, we can work around it by starting at a different point and including the garden first.