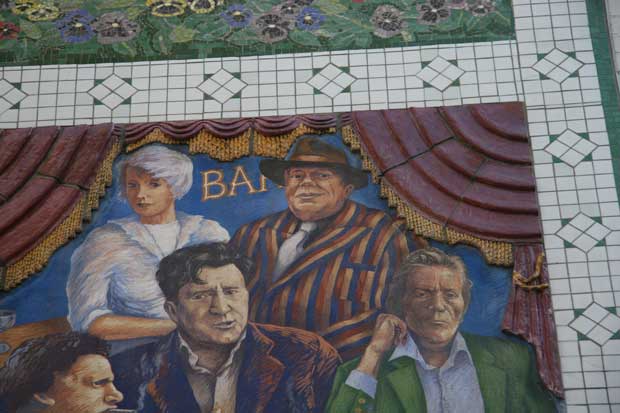 Since the 17th Century Soho has been London’s most cosmopolitan quarter and a walk around the streets of this vibrant village is, in more ways than one, a true revelation.

In short, it is an area where the past and present mingle seamlessly together and where the fascination of discovering snippets of long ago history combines with the thrill of uncovering memories of recent history to create a tour that is informative, entertaining and thoroughly gripping.

We Begin At The beginning

Long ago, however, the streets of Soho that we explore on this enjoyable walk were green fields to which wealthier citizens would resort to enjoy the thrill of the chase with a day’s hunting. It was their cry of “So-ho!”, meaning “the hare is found” that echoed down the years to five the village its name.

From this inauspicious beginning the village of Soho evolved and was soon attracting a cosmopolitan community that included refugees fleeing persecution, bohemians seeking inspiration, the down on their luck seeking salvation, and misfits seeking acceptance.

One of London’s Worst Slums

By the 19th Century its fortunes had slumped and it had become one of the Capital’s worst slums. Yet luminaries of the age, such as Karl Marx and Charles Dickens, still came here to enjoy its unique atmosphere.

Where British Pop Music Was Born

Today it is, very much, a village of contrasts, with vestiges of its past ages still visible to those who are willing to scratch the surface and uncover them.

A Cast of Characters Both Famous and Forgotten

But it’s people, not buildings, that make history and the Soho Walk is brimmed full of some truly memorable characters from the area’s past and present. Their stories will fascinate and amuse you in equal measure.

You’ll hear of the King who, having fled his kingdom, ended up in a debtors prison in London where, to quote the epitaph on his memorial stone, “fate poured its lessons on his head, bestowed a Kingdom, and denied him bread.”

You’ll see the former residence of John Logie Baird from which he transmitted a few flickering images of his odd-job boy and, in so doing, ensured that evenings spent at home would never be the same again!

You’ll stand outside the studio where the Beatles recorded various tracks, most notably Hey Jude.

You’ll see the pump (well a replica of it at least!) that led Dr John Soho to the presumption that the Cholera epidemics of the 19th Century were being caused by the water that the people of London were drinking. You guide will tell you how, when his theory was met with incredulity, the formidable Dr. Snow resorted to a desperate measure that proved his point once and for all.

You’ll have the opportunity to sniff out the Seven Noses of Soho, and hear the fascinating story of the artist who created them. This alone is worth the price of the tour because, it is said, that if you spot all seven of them you will attain infinite wealth. Now there’s a tempting challenge!

You’ll see the pub to which George Orwell made a beeline to celebrate the fact that the American-Book-Of-the-Month-Club chose his Animal Farm as their book of the month.

And, if all this is not sufficient to have you donning those walking shoes and venturing out onto the streets of Soho, then how about the opportunities to hear lots more gossipy history, see some amazing pieces of street furniture, and enjoy some of incredible street art that now adorns the streets of Soho, not to mention the occasional, possible glimpse, of the odd rock star or celebrity who might, like you be out and about enjoying the scene in the remarkable village of Soho.

Outside Tottenham Court Road Underground Station.
By the Dominion Theatre.