IN THE FOOTSTEPS OF THE BARD 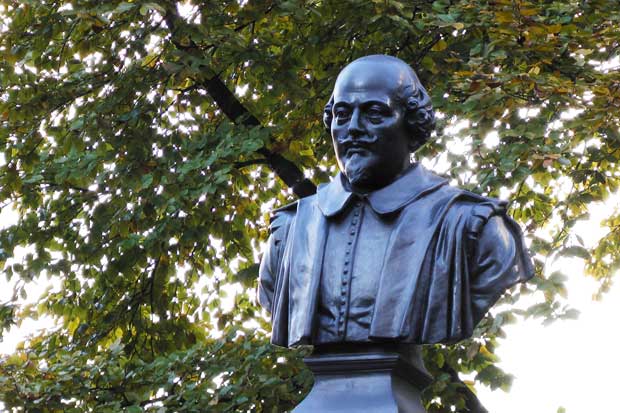 WALK THE STREETS OF ELIZABETHAN LONDON

So, on this tour we set off in search of those places that Shakespeare knew, and use them to bring the streets of Elizabethan London, and its colourful citizens, to vivid and dramatic life.

You’ll be pleasantly surprised by how much of Shakespeare’s City still exists, if you know where to look!

Luckily, on this tour, you will be in the company of someone who most certainly does know where to look, a guide who will leave no corner unturned, no alleyway unvisited and no ancient churchyard unexplored, on the strict understanding that Shakespeare walked that way before you.

A Lively and Historical Start

So, to begin with, the Shakespeare walk ventures into a magical sequence of old streets and alleyways that were once part of a raucous district of ill-repute from which Shakespeare drew the inspiration for several of his immortal characters.

Our route brings us to London’s only surviving medieval gate, little changed since the days when Shakespeare himself came a-calling to have his plays licensed by the Elizabethan censor.

Having gazed upon this true relic of bygone London, we duck into a shady passageway that enjoys a far from salubrious history to find our way to an ancient church where you will hear of its connections with Shakespeare’s contemporary and rival, Ben Jonson.

Across the road from the church stands a residence that was built whilst Shakespeare was still alive. Who knows, maybe Shakespeare himself would have gazed up and the façade of this old house as he made his way home through the streets of London?

Where Shakespeare Lodged in London

Speaking of home, we next pick our way through several more delightful old streets to pass the old City Wall, and then find our way to the location of the street on which Shakespeare lodged during much of his time in London.

Now, the street itself, along with the house in which he lodged, have long since gone.

Yet there are remnants scattered around that Shakespeare would most certainly recognise and at which he would, no doubt, have cocked a sideways glance as he passed them by.

How about a churchyard in whose church (now vanished) Shakespeare acted as a matchmaker for his landlord’s daughter and her husband-to-be?

Indeed, when they finally tied the knot, Shakespeare actually attended their wedding. How’s that for an impressive guest of honour?

Then we’re off once more into the breach dear friends or, to be precise, more old streets, where tales of the past will come thick and fast.

Streets that Inspired the Bard

You will see the memorial to the two friends of Shakespeare who, in 1623, put together the first folio of his plays and who, in so doing, “earned the gratitude of all mankind.”

You will seek out the place where the man upon whom Shakespeare may well have based Shylock was tried for treason.

You will delve into a narrow alleyway – one so narrow that you’d probably walk straight past it were you out walking on your own.

Here we will encounter the site of the former home of the man upon Shakespeare based one of his greatest comic creations – Sir John Falstaff.

Where Shakespeare’s Works Were First Sold

From here the tour weaves a merry dance to St Paul’s Cathedral, although the Cathedral Shakespeare would have known was destroyed in the Great Fire of London in 1666.

But, fear not, your guide will paint a vivid picture of what it looked like in Shakespeare’s day, when it was at the heart of the City’s book trade.

So, if you wish to connect with the life and times of England’s greatest dramatist, and you want to see the streets and buildings that he would have known, then join us for a fascinating tour that will be your key to unlocking the many secrets of Shakespeare’s Lost City.

Outside Farringdon Station
In Front of The Castle Pub