THE GHOSTS OF LONDON'S THEATRELAND

PHANTOMS OF THE FOOTLIGHTS 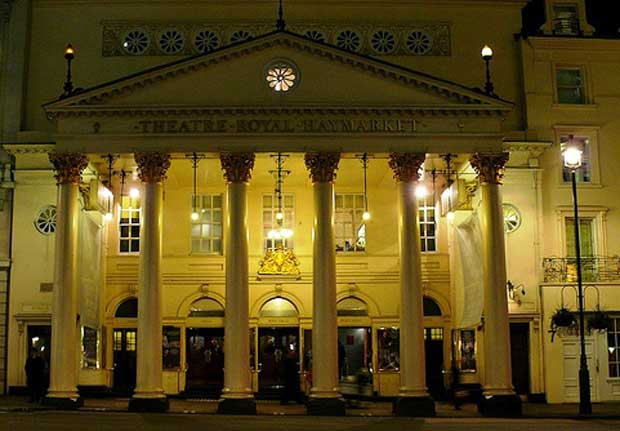 THEY HAVE SHUFFLED OFF THIS MORTAL COIL

What is it about London’s West End theatres that makes them such a magnet for the stage stars from days of yore? Why is it that their ghosts feel compelled to return and tread the boards of the stages that their living selves knew so well?

Well, join London’s leading paranormal authority, Richard Jones, for a creepy wander around the narrow alleyways and gas lit passageways of the West End, and you’ll most certainly find the answers to both these questions and many more besides.

We Begin At A Haunted Underground Station

Your journey begins at one of London’s haunted underground stations. Could it do otherwise? Indeed, this station – for reasons which, as our guide will explain, are not 100% certain – is haunted by a phantom Thespian whose wraith we will encounter again later on in the tour.

Our next haunting is unique and original to this ghost walk. Being London’s leading authority on the paranormal Richard is constantly contacted by those who have encountered ghosts whilst going about their everyday business.

In February 2013, Richard received a letter from a former sergeant who used to work at the old Magistrates Court we encounter early on in the tour.

The letter began “with reference to your excellent book about Haunted London there is one place that you did not mention.” The writer then went on to tell of at least three ghosts that haunt the building and offered to meet with Richard to talk more about the ghostly activity at the building.

Needless to say, Richard was there like a shot and, not only will these stories appear in his next book on Haunted London, but you’ll also get to hear them on the West End ghost walk.

From this creepy old building, our tour will drift effortlessly through a warren of tiny alleyways, to arrive at the oldest, and most haunted, theatre in London.

Oh, the tales of hauntings past and present that you will uncover as you tremble beneath its soaring walls.

Tales of the ghostly clown (aargghhh I hate clowns! Ed) whose, unable to resist the allure of the footlights, still returns to the stage to administer a well-aimed mischievous kick to unsuspecting actors, actresses, usherettes and cleaners.

Tales of the tragic comedian whose latter years were afflicted by chronic incontinence and whose not so fragrant ghostly aroma has been known to assail the nostrils of many a leading man and lady.

Tales of the disembodied white face that has been known to materialise and sundry locations around the theatre.

But, by far the most famous phantom, in a cast of many, is the man in grey, an apparition so auspicious that those who sight him are, quite simply, overcome with utter joy! Why? You’ll hear the full story on the West End ghost walk!

The Ghostly Head In The Lap

Here, on a long ago occasion – as with many hauntings specific dates are hard to come by – a particularly gruesome haunting occurred, when a head, minus its body, was seen leering up from……. well we’ll cross that threshold when we come to it!

A Long Ago Theatrical Murder

Next up, we drift silently through some extremely sinister gas lit alleyways to arrive at the spot where, in 1897, a notorious murder took place.

The victim of the heinous crime was one of the best known and greatest actors of the age. The perpetrator, a much lesser known and far less talented one.

The crime itself took place on the very spot on which you will be standing, and the ghost of the victim may well honour us with a brief curtain call, much as he has been doing for over 100 years.

Richard is up to speed on the most recent aspects of this particular haunting and he will bring you up to date on any recent appearances of the ghost of...

The Real Life Diagon Alley And The Strangler Jacket

More dark alleyways then await us, as we thread our way through a series of thoroughfares that are, well and truly, throwbacks to a bygone age. Most of them are lit by the dull glow of gas lamp lighting, and all of them are steeped in atmosphere. One of them was even the reputed inspiration for Harry Potter’s Diagon Alley, that’s how magical and enchanting this section of the route is!

En route we pass a theatre where a theatrical prop – a ladies bodice no less – became possessed by a malevolent entity that attempted to do harm to any actress who had the misfortune to have to wear it in the course of a performance.

The Ghost Of The Man Who Hated Critics

Putting such tales of terror behind us, we make our way to another theatre – one which, incidentally, doubled as the Gotham City Opera House in the Batman films.

But it is the theatre’s resident ghost that brings us to this grand and glorious place.

For this theatre is haunted by the ghost of a former manager who took his duties very seriously indeed – so serious that he even went so far as to ban a theatre critic who dared to pan one of his productions!

In death he returns to check that things are still running smoothly and that audiences are still enjoying the exacting standards he set, and which he expects, at what is still, very much, his theatre.

You’ll hear all about his most recent haunting and learn how he was somewhat troublesome to the builders during a recent refurbishment.

Our final destination is one of London’s loveliest theatres, and one that has a truly fascinating history.

It is also home to one of Theatreland’s most active ghosts, one that has appeared to the likes of Sir Patrick Stewart and Sir Donald Sinden.

It is a measure of Richard’s reputation in the paranormal field that he has had the good fortune to meet with Sir Donald Sinden on several occasions at this very theatre.

Sir Donald was only too pleased to tell Richard the full story of his encounter with the theatres resident ghost on the very spot on which it occurred.

Thus, on Richard’s tour, you’ll hear the full story of a sighting of the ghost exactly as it happened and not one spooky detail will be left out.

The West End Ghost Walk will also feature explanations about many theatrical traditions and superstitions. Why is it unlucky to whistle back stage? What is the origin of the saying “break a leg”? Why shouldn’t you ever utter the name of Macb……. oops, sorry, the Scottish Play? You will learn the answers to all these questions, and many more besides, on a tour that is steeped in history, folklore and theatrical traditions.

So join London’s premier ghost walk guide on a spooky, spectral journey through the old alleyways that snake their way between and behind some of London’s most illustrious theatres and learn of the many ghosts that haunt London’s Theatreland.