WHAT TO BUY AND WHERE TO BUY IT 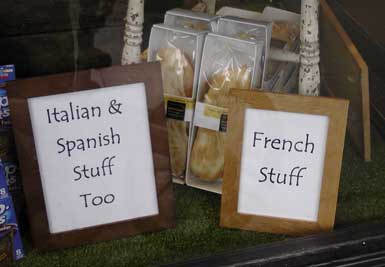 London boasts some of the world’s best shopping and offers a huge range of shops and markets that cater for all tastes and all budgets. There’s everything from designer stores to legendary department stores, not to mention specialist shops that deal in anything from bespoke shoes and hats to fine Cuban cigars. No matter what your tastes London is bound to have something for you and, in our London shopping guide we list a selection of well known and lesser known shops and markets.

The big one that everybody wants to visit is Harrods, 87-135 Brompton Road, Knightsbridge, London, SW1X 7XL. The closest underground station is Knightsbridge and you can’t miss the store itself, just follow the crowds! It opens from 10am to 8pm Monday to Saturday and from noon to 6pm on Sundays (you can arrive for browsing only from 11.30am to noon. Harrods boasts a stunning array of palatial departments, and its exquisite Food Hall is both mouthwatering and breathtaking. You can get a good feel for the store from their website.

Oxford Street is London’s main shopping street and boasts over 300 stores, between them selling just about anything you could wish for!

Obviously, with 300 stores to choose from listing them all here is not a viable proposition, however Oxford Street itself does have a detailed and informative website to help with the planning of your shopping expedition!

Other stores dotted along Oxford Street include Marks and Spencer, Primark and Debenhams.

Be warned that Oxford Street can be extremely busy most days of the week, but on Saturdays and Sundays it can become a veritable tsunami of humanity!

For the more techno-minded you will find the Apple Store, 235 Regent St, W1B 2EL.

Piccadilly is another of London’s great shopping streets and is home to the wonderfully old fashioned Burlington Arcade, one of the world’s oldest shopping malls, which dates from 1819, and where top-hatted, tail-coated beadles are still employed to enforce the arcades Regency rules, which include a ban on running, shouting, singing, humming or whistling!

Across the road is Fortnum and Mason, 181 Piccadilly, that offers a wide array of gift items, porcelain, and crystal. You can breathe in the fragrant aromas of the unique and rare offering in the perfume department, or simply feast your eyes on the mouthwatering offerings available in the legendary Food Hall.

Nearby, you’ll be able to sniff your way into one of London’s finest perfumers, Floris at 89 Jermyn St, London, SW1Y 6JH.

For an entirely different type of fragrance pop into Paxton and Whitfield’s, shop at 93 Jermyn Street, London SW1Y 6JE, which offers a plethora of delicious high quality cheeses.

Just around the corner from Jermyn Street, and equally as old world, is St James’s Street, lined by several shops that have been supplying Royalty with goods, apparel and luxuries for many generations.

First off is Fox of St James’s, 19 St James’s St, London, SW1A 1E purveyors of some of the world’s finest cigars. The shop used to supply Winston Churchill with his trademark cigars and boasts a museum where you can see the chair in which he used to sit on his visits here.

Lobb, at 9 St James’s Street, London SW1A 1EF, are a bespoke bootmakers and have been crafting footwear for royalty since the 17th century, whilst Lock and Co Ltd, at 6 St James’s St, London SW1A 1EF have been covering the heads of monarchs, princes and even Hollywood stars, for equally as long. Well, obviously not the Hollywood stars in the 17th century!

If you want to leave London with some wonderful old antiques, then head over to Notting Hill Gate Station and nearby Portobello Road. This mile-long (1.6km) thoroughfare boasts an eclectic array of stalls and shops and is open from 8am to 6.30pm Monday, Tuesday, Wednesday, Friday Saturday. 8am to 1pm on Thursdays

It doesn’t take a weatherman to know that there’s a good chance of rain in London, so an umbrella is an essential item to have in your armoury against everything that London can throw at you. James Smith and Sons, at 53 New Oxford Street WC1A 1BL have been keeping the well-heeled dry since 1830 and their shop is a cornucopia of colourful and more traditional styled brollies, plus walking sticks and riding crops. However, they’re not cheap so you’ll need to be extra careful not to leave your purchase on the tube or bus!

Twinings, located at 216 Strand, London WC2, is one of London’s oldest shops and has been trading since 1706. Over 100 varieties of teas and infusions are sold at this emporium of the humble (and, in some cases, not so humble) cuppa and you can even try a free taster at the Tea Tasting Bar.

QUICK INFO FOR
SHOPPING IN LONDON

Generally shops in London open Monday to Saturday from between 9 and 10am to between 5.30pm and 6pm.

On Sundays some stores open for browsing
at 11.30am and for shopping from noon to between 4pm and 6pm.

In the United Kingdom Value Added Tax (VAT) is payable on goods and services, although there are exceptions to this, such as books. VAT is normally included in the price charged.

Visitors from outside the EU may be entitled to a refund on goods purchased from shops that participate in the Tax Free, also known as the Retail Export, Scheme.

The scheme allows travellers departing the European Union to reclaim the 20% tax they have paid on goods purchased in the UK and which they take home.

The refund does not apply to services.

HOW TO CLAIM A REFUND

As with most government schemes there is a certain amount of jumping through hoops to ensure you are eligible.

But, in a nutshell, claiming the VAT back falls into two categories.

AT THE TIME OF PURCHASE

Since it is a voluntary scheme not all shops participate. Either look for a Tax Free Shopping sign or simply ask the assistant who serves you.

In order to claim back the 20% VAT, you will need one of the following documents, which the shop will provide:-

Some shops have their own version of form VAT 407.

You must fill the form in at the time of purchase in front of the retailer. You will also need to show evidence, a valid passport will do, that you are, in fact, entitled to use the scheme.

You also need to inform the retailer how you wish the refund to be paid. Some shops will pay you the refund directly, others will operate through a refund company, and some will have an arrangement with a refund booth at the point where you leave the UK.

Since some retailers and refund companies make an administrative charge for handling the form, you may not get back 100% of the VAT you have paid.

WHEN YOU LEAVE THE COUNTRY

If you are leaving the European Union, then ensure you allow enough time to deal with the necessary red tape when you arrive at the airport. Remember, you might not be the only one claiming a refund so it might be very busy.

You will need to show your goods and your VAT refund form to a UK Customs Officer at the relevant desk at the airport you're leaving from. To avoid confusion and delay it's worth asking Airport Information for the location of the desk.

If you're not leaving the EU, but are travelling to another country, then you will need to show your purchases and refund form to the Customs Officials of the country from which you leave the European Union.

Once Custom Officials have agreed your refund, you can then reclaim the VAT you have paid in the manner agreed with the retailer at the time of purchase.

This can be done by either posting the form back to the retailer, who will then make the necessary payment, or by posting it to a commercial refund company to arrange payment of the refund.

It all sounds very complicated put given that 20% of your purchases may have been taken up by VAT the refund can be quite sizeable. So it's worth the effort!