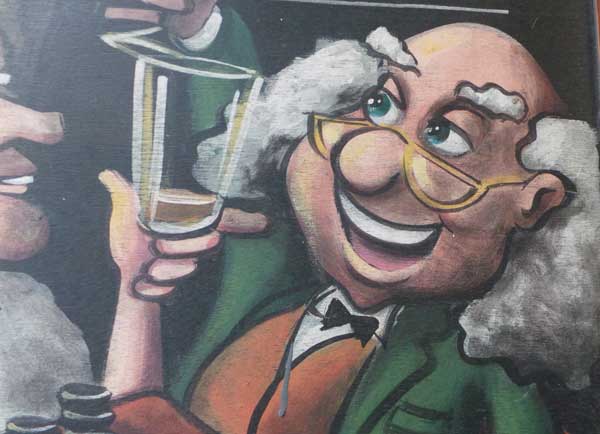 “There is nothing which has yet been contrived by man, by which so much happiness is produced as by a good tavern or inn.”
Dr Samuel Johnson

Nowhere does London’s past come more vividly to life than within the walls of the City’s old inns and historic taverns, and on this walk you will visit four of the most atmospheric pubs imaginable.

Time capsules every one of them.

THE PUB THAT WREN BUILT

Setting off into the London night you will delve into a warren of narrow alleyways that line the banks of one of the City’s underground rivers to seek out a pub that was built by Sir Christopher Wren as a hostel for his workmen who were rebuilding London after the Great Fire of 1666.

Here you will have time to enjoy a frothing tankard of ale, or another tipple of your choice whilst exploring the interior of a real gem of a pub.

Back out into the night and your guide will regale you with tales of some of the colourful characters who have lived hereabouts.

You’ll hear tales of Oliver Goldsmith, who was imprisoned in his rooms by his landlady when he was unable to pay the rent!

Of Dr Samuel Johnson, who famously observed “when a man is tired of London, he is tired of life; for there is in London all that life can afford.”

Of Charles Dickens and William Shakespeare, and of sundry other bygone Londoners – some famous, some forgotten – who have, in one way or another, left their imprint on the pages of London’s rich history.

A TRUE TIME CAPSULE OF A LONDON PUB

Then its over the threshold of our next old hostelry, the first in London to be rebuilt after the Great Fire  of 1666 no less.

It’s cosy interior is a veritable labyrinth of tiny rooms and cubbyholes, low beamed ceilings and walls that, quite literally, drip with history and atmosphere.

It also boasts an impressive list of former patrons. Royals, such as Edward V11 and writers such as Charles Dickens and Sir Arthur Conan Doyle, the creator of Sherlock Holmes.

You’ll also meet with a former resident who was once internationally renowned for being able to swear at visitors fluently in nine different languages!

VIA OLD ALLEYWAYS TO OUR NEXT TAVERN

Having allowed time to enjoy a drink and delve into the pub’s cavernous cellars, we will move on through another warren of old alleyways in search of our next historic hostelry.

NOT JADED, NOT FADED, BUT STEEPED IN HISTORY

Now, this one might not have the jaded, faded historic ambience of our previous watering hole, but what it makes up for it with a literary history that is writ large across every inch of its beamed bar.

Samuel Pepys was known to dally here; Dickens was a visitor, as was Tennyson, who he was wont to compose effusive ballads dedicated to the pub's head waiter - and you'll be able to read one such composition as you raise your next tankard of frothing ale!

AND SO TO OUR FINAL PUB

Having absorbed the ambience of this remarkable old pub we move on to hunt down our grand finalé, a backstreet boozer that is so tucked away down an old alley that only those who are in the know ever venture across its threshold.

A favoured haunt of m'learned friends from the adjacent Inns of Court, this is one of those pubs where you can sit, wind down and just contemplate the evening that has just flown by in which you made the acquaintance of famous figures from London's past, not to mention having enjoyed the companionship of your fellow walkers with him bonds will most certainly have been forged.

COME AND JOIN US FOR A WELCOME DIFFERENCE

So, if you fancy a night exploring bygone London in places that the past has still to depart from then join the Historic London Pub Walk and enjoy a night out in the past. Chin chin!