IT'S A FUNNY OLD CITY 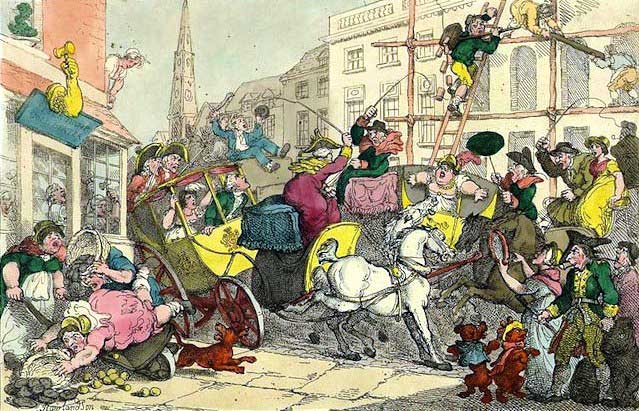 DISCOVER THE SILLIER SIDE OF HISTORY

First off and foremost this is not the sort of walk on which your guide bombards you with quick fire gags. Rather, it is a walk through London’s more humorous history taking in quirky stories, amazing facts and gossipy anecdotes, whilst looking at the funnier side of the everyday lives of those whose stories helped shape this city.

THE ANCEINT CITY BY NIGHT

You’ll, most certainly, see the streets, buildings and tucked away places of the old and ancient City of London. But you’ll see them from a totally different perspective than the traditional approach that you might expect a City history tour to adopt. This is living, breathing history, crammed full of fun facts and humourous tales.

Truth, they say, is stranger than fiction and, on this hilarious walk, you’re going to experience first hand just how true that simple statement is. We’re going to lift the nightie of history, slither down the drain pipe of time, crawl up the chimney of..err.err.err…. Darn I was doing so well then!

Clichés aside, this walk is all about the fun and funnier side of the City of London’s eventful past. Let’s face it, people do the daftest things and, if you think about it, with 2,000 years of history crackling away, both above and beneath its streets, London has had plenty of time to amass a veritable cornucopia of dumb, and dumber, resident faux pas.

Indeed, the things that medieval Londoners were capable of, and the things that they actually did – or, at least, tried to do – could leave even the staunchest proponent of human ineptitude scratching their head and wondering out loud in baffled bemusement “what were they thinking?”

The only thing is that, in the past, these acts of gross idiocy were interred with the bones of those who committed them.

But then we began blowing the dust off the musty old parchments at the City of London’s top secret Stupid Acts Records Office, and started unearthing prize morsels of bygone moronic doings!

We begin with the baker who, one halcyon night in 1666, retired to bed with that niggling feeling – and one that we’ve all experienced just before we’ve managed to burn an entire city down – “I’m sure there’s something I forgot to do”.

Heading off through the old alleyways of the City, we follow the early stages of the slight blaze that resulted from his momentary lapse of memory to reach the spot where the then Lord Mayor, Thomas Bludworth, showed himself to be in full command of the situation when he uttered one of history’s greatest, rudest, and least prophetic risk assessments.

From these auspicious beginnings, we pick our merry old way through several acts of rank stupidity to stand beneath the pedestrian approach to Old London Bridge.

Now, to be honest, without looking at the blue plaque on the wall right beside you, you’d have absolutely no way of knowing that this used to be the pedestrian approach to Old London Bridge.

Nor would you know, without googling it, what it is that connects London Bridge with your mobile phone.

Anyway, as the saying goes, where there’s water there’s daftness (what saying? Ed) and the proximity of the racing tides of the Thames have ensured that this tiny corner of London is awash with bizarre tales with which your guide will regale you.

IN FOR A PENNY

Next, we squat on the banks of the Thames to discuss the toilet habits of medieval Londoners. Oh the lengths to which these people went to dispose of their waste, often with stomach churning, but hilarious, consequences!

Not one dirty detail – from oyster shells to sponges dipped in salt water, to gong farmers and houses of easement – will be left out of this part of your guides scintillating narrative.

This segment of the tour will also feature some of the very bizarre, not to say incredibly rude, street names that Londoners had to live with, and on, in the times when sensibilities were less easily offended than they are today!

DID YOU EAT MY LUNCH?

Having flushed these fascinating facts down the toilet pan of the past, we move on to wash our hands in the more salubrious history of the Victorian era.

Now, at first glance, a couple of workmen losing their lunches might not seem that noteworthy.

But the fact that these Victorian labourers chose to carve the tiny images of the culprits responsible into the stonework of their completed building, now that’s worthy of mention.

Not only will you hear the story, but you’ll also get to see their carving, which is so tiny that many who pass it on a daily basis, year in and year out, fail to notice it. Indeed, your guide has been looking for it for years and still can’t spot it!

A Cornucopia of the Amazing and the Downright Daft

Streets, the names of which belie a sordid past abound as you make your way around the old City of London.

Alleyways where long ago citizens embarrassed themselves in the most compromising of situations are scattered around the route.

Buildings where architects and builders alike took exquisite revenge on complaining neighbours crop up here and there. In fact, you’ll see one such vengeful handsome devil (literally) in the picture to the right.

Inept City officials, whose attempts to cover up their inadequacies simply made matters worse come under our srutinising gaze.

Eccentrics who lived their lives as they saw fit, oblivious to the disapproving tuts of their strait-laced neighbours are given justified homage.

And bizarrely useless pieces of street furniture that seemed a good idea at the time, but which have us scratching our heads in bemusement today, are encountered in abundance.

Indeed, the reminders of bygone bungling are everywhere on this hilarious, fascinating and informative walk as we lift the lid on the wonderfully comic side of London’s eventful past.

So join your guide for an fun-packed and irreverent journey through 2,000 years of blunders, gaffes and missteps that will keep you smirking, smiling and chortling throughout.

Outside The Fish Street Hill Exit of of
Monument Underground Station