THE INNS AND TAVERNS OF OLD LONDON 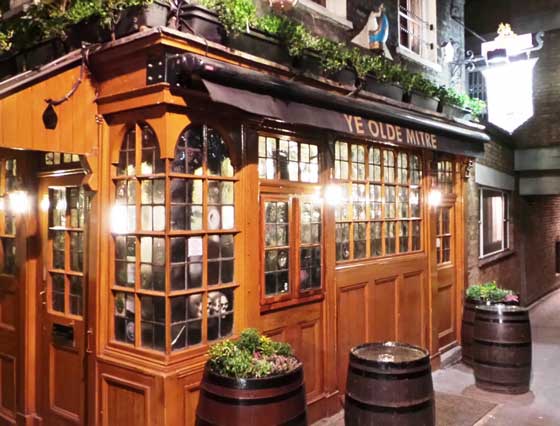 SPEND AN EVENING IN BYGONE LONDON

Oh, what a tour awaits you tonight!

This is a walk around London for those who want to experience the city's most atmospheric and historic places - the places where Londoners and visitors alike have been coming together for hundreds of years to exchange gossip, swap funnny stories, hear what's going on nad, in quite few cases, simply drown their sorrowsover a pint and a chat.

In short, the Secret London Pub Walk offers you the unrivalled opportunity to step back into London's past and sample the conviviality of some of the Capital's most historic inns and taverns.

The Secret London Pub Walk actually begins amidst the baronial splendour of a pub that seeps history from every pore of its atmospheric interior.

This place is a true London landmark in its own right and boasts one of the longest, if not the longest bars in London.

WE DELVE INTO HIDDEN LONDON

Having wet our whistles, so to speak, it'll be time to set off to delve into the hidden parts of historic London that other tours, quite simply, don't reach to enjoy a night of history and hostelry.

There are so many tales to tell about the area that we explore.

Tales of Dickens and Shakespeare; of the sober and the sot; of dastardly villains and disgraced lawyers - yes, the area we explore is legal London at its best of times and its worst of times.

Via a building that is so grand that it will, quite literally, take your breath away, we pass through a narrow gate that leads into a narrower alleyway through which we will squeeze our way into London's most hidden and smallest pub.

Built in 1567, this place is as atmospheric a hostelry as you could ever wish to encounter.

And encounter it you will.

From the remains of its cherry tree, around which Elizabeth 1st is said to have danced, to its massive oak table, which is so big and so cumbersome that tradition maintains - and observation seems to confirm - that the pub itself was actually built around it.

The interior of this wonderful little pub can have hardly changed, if it has changed at all, since the days when the likes of the great Samuel Johnson and the even greater (says who? Samuel Johnson) Charles Dickens once whiled away the hours imbibing within its history-daubed walls.

We will pay homage to them by raising a frothing tankard to their memory, and to the memory of the countless other men and women who have, over the last 400 years, stooped beneath its low-beamed ceilings to partake of its hospitality.

By this time the night will be, well and truly, upon us. Bonds will have been forged with your guide and fellow tour companions as we set off into the London night, as merry band of pubsters as ever wove their way through a City night.

THE NIGHT HAS FURTHER SURPRISES

Our next destination, reached via a veritable maze of historic backstreets, is a location that labours under the decidedly sinister sounding designation of "Bleeding Heart Yard".

How did this quaint and peaceful backwater come by such a gruesome name?

Worry not, your guide will reveal all as he embarks upon a breathtaking tale of a long ago deal with the devil and of a masked ball at which, at the height of a fearsome storm, the devil turned up to collect!

One thing is, however, certain. Your own heart will be beating a tad faster as you leave this place, no doubt glancing nervously over your shoulder lest the protagonist of the chilling tale has joined our group.

But then, that's what a good pub walk should be. Great storytelling, lashings of pub lore and loads of fascinating facts that will cause you to look at London in a completely new and different light.

And so we begin our cautious descent of the banks of one of London's underground rivers to hear a bit about its far from salubrious history.

This will deliver us into a sequence of streets that once played host to one of London's most notorious gambling districts, a claim that segues nicely into the final pub of the evening.

A GREAT TALE TO END WITH

Picture, if you will, the area as it was in the early years of the 19th century. Now, form an image of a well-dressed, and rather portly gentleman who has a decidedly regal air about him, but who has in fact gambled away his far from modest means in one of the districts gambling dens.

Embarrassed, he sets off into the very streets through which you will walk, pushes open the time worn door, just as you will do, crosses to the bar, just as you will, and offers the landlord a priceless possession in exchange for a small loan.

Your guide will tell you the full story and will point out the pubs lasting legacy from this long ago exchange between the landlord and the louche.

What better place to wind down after a fun filled, history packed night exploring the streets, alleyways and historic hostelries of bygone London?

Outside Exit One of
Chancery Lane Underground Station