THE CITY OF DREADFUL NIGHT 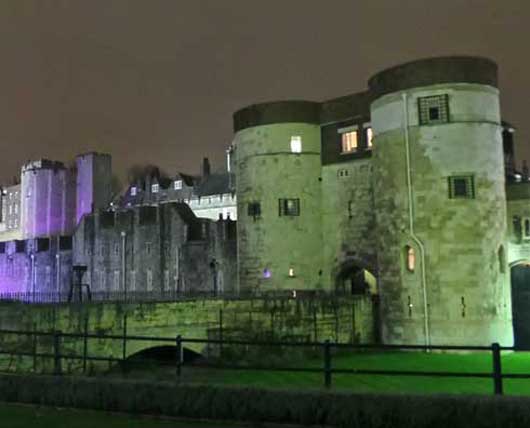 FROM HELL TO ETERNITY

Nighttime is the right time for seeking out the ghost that haunt the old streets of London and, on this walk, you will encounter the supernatural tales of some of London's most spectral locations.

Indeed, you will come face to face with paranormal history at its most chilling in an area that has seen so much infamy and ignomy that it would actually be a surprise to find that it wasn't haunted.

So, come along and meet London's undisputed Doyen of the Darkness, who will be suitably attired in his Victorian undertakers garb, as he leads you into the dark recesses of a quarter of the old City from which the past has yet to depart.

We begin our night alongside the Tower of London, a fortress the walls of which have born witness to so many dark deeds that it's history, it could be said, is written in blood.

From poignant princes, to querulous queens. From ignoble nobles to cursed countesses. From dastardly dukes to sinister statesmen.

The ghosts just come tumbling out of every nook, cranny and crevice of this building and Richard will regale you with the stories of a plethora of phantoms that will chill your blood and send cold shivers racing down your spine.

From this spectrally auspicious start, we make our way to one of the City's oldest churches to hear the tale of the ghost of the 19th century choir mistress who has been known to make a return visit to oversee the Carols at the annual festive service.

Then, we crest the summit of the infamous Tower Hill to stand on the very spot where may who found themselves incarcerated within the walls of the Tower of London were put to death.

It's a chilling spot indeed, and one to which the trauma that many of them endured has kept them returning to time and time again.

ST GHASTLY GRIM IN ALL ITS GHOSTLY GRIMNESS

Onwards we go, forging our way through the old and historic streets of the ancient City to reach a churchyard that is still surrounded by high walls, topped by ferocious spikes, the intention of which was to keep the infamous body snatchers at bay in the early years of the 19th century.

But the feature that will, most certainly catches your eye, will be the hideously creepy stone skulls that leer down from the arch that surmounts the churchyards sturdy gates.

There can be few more sinister, not to say chilling, decorative features in the City.

Indeed, they even caught the eye of Charles Dickens as he roved abroad in the City one night, and he promptly dubbed their church, to the burial ground of which they act as silent guardians, the church of "St Ghastly Grim."

Your encounter with them may well be made more memorable if, perchance, the phantom form that is known to lurk in the churchyard beyond them, chooses to honour you with an appearance, albeit, for reasons we'll go in to on the tour, such an appearance might not be a welcome one, as it does not bode well for those who see it!

Our journey then delves deeper into the darkness of the shadow-draped streets, as we head down a cobbled hill to try and attract the attention of the ghostly grabber, whose icy, though invisible, hand has been known to wrap itself around the ankles unsuspecting wayfarers who pass this way after dark.

Here, in this haunted hinterland of the abandoned City, the ghosts flow freely across the centuries.

There is the apparition of the girl who seeks her mother, who was taken from her by the ravages of the Great Plague of 1665; there is the limping spectre of the 19th century delivery man who still struggles up the hill where he met with a tragically unfortunate accident; there is the ghostly clergyman whose kneeling form - not to mention his disturbing habit of vanishing in front of those who meet him - who haunts one of the City's most historic churches.

And, if all the aforementioned apparitions, prove insufficient to tempt you out onto the spectral landscape of the ancient City, then how about the very spot where the Great Fire of London broke out in 1666, a disaster so traumatizing, that many came to see it as a punishment by God for the licentiousness of Stuart London, and of course, it didn't go unnoticed that the number of the beast - 666 - was present in the year that the conflagration swept across London.

YET ANOTHER BURIAL GROUND

By way of an old wooden building (constructed in 1663 and which, miraculously, managed to avoid the flames of the Great Fire) we make our way through a narrow passageway that runs between the high walls of an ancient burial ground in which creepy tombstones cast long shadows across our path.

But whose is the menacing voice that is sometimes heard whispering from the shadowy depths of this place of little rest, and which urges those who hear it to "be on your way now?"

With the night well and truly upon us, we make our way to one of London's most mystical artefacts, the fabled London Stone.

There are all sorts of theories about the origins of this mythical piece of ancient stone, and your guide will tell you each and every one of them, leaving, if you will pardon the pun, not one stone unturned.

It once attracted the attention of the mysterious astrologer, and alchemist, Dr. John Dee who took shavings from it to mix into his potions to help him ..... well you'll hear exactly what he used them for in the closing moments of the Haunted London Walk.

The tour is currently only available for private bookings.

Outside The Tower of London Ticket Office

The Haunted London Ghost Walk can only be booked as a private tour for your office social, tour group, or even as an outing with a difference for a group of friends or relatives.