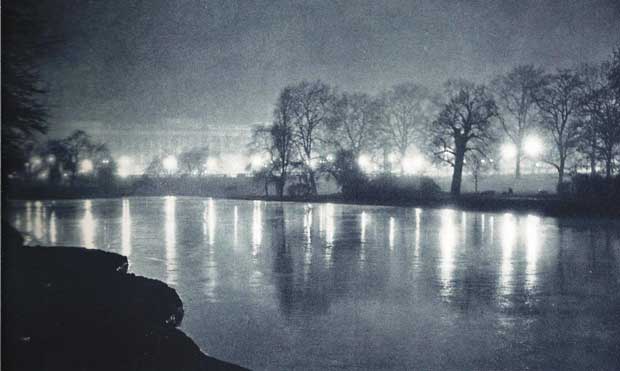 Includes The Most Haunted House In London

‘Tis the hour when grim twilight casts its menacing shadow across the darkening streets of London’s West End. The hour when the shopkeepers pull down their blinds and the street lamps flicker into life.

As the bag-laden shoppers struggle home, jostling one another for a seat on the tube, or pushing and shoving their way to be first on the bus, things begin to stir in the old alleyways and dark corners of London’s West End, and the haunted Capital’s ethereal populace awakes once more, and the ghosts of previous times return to reclaim those places that they knew so well in life.

The Haunted Lake And The Headless Phantom

First there comes the darkness of creepy park, where we stand on a bridge and gaze into the ink-black waters of a lake from the depths of which a headless spectre has been known to emerge and run screaming (don’t worry, we’ll ponder how you can “run screaming” when you haven’t got a head) across the park.

Even Charles and Camilla’s House Is Haunted

Turning round, we gaze upon the grandeur of Buckingham Palace which boasts two ghosts, one of which is said to appear with alarming regularity each Christmas Day.
Having lingered at this spooky spot for as long as we dare, the ghostly tales take on a decidedly Royal flavour now as we learn of the ghost that haunts Clarence House, the London home of Prince Charles and Camilla.

Turning round, we gaze upon the grandeur of Buckingham Palace which boasts two ghosts, one of which is said to appear with alarming regularity each Christmas Day.

Royal Ghosts And A Long Ago Murder

Murder is very much on our minds as, by way of some more wonderfully atmospheric old alleyways, we make our way to the Royal Palace where the phantom forms of both the victim and the perpetrator have been condemned to act out the infamous crime time and time again.

Raised voice, a dull thud and the sickly sweet smell of fresh blood are the chilling accompaniments to their spectral drama.

Your guide will regale you with the full sordid tale of how one of the highest in the land, a man who may even have ascended the throne of England, had fate not stepped in his way to prevent it, was able to, quite literally, get away with murder, and was able to convince the subsequent enquiry into his sordid crime that his victim had, in fact, committed suicide!

This tree’s sinister reputation goes back many years and it has become a true fixture on the haunted Capital’s ethereal landscape.

Few birds ever dare sing from its branches, and -so it is whispered in hushed tones amongst park workers – some who have fallen asleep beneath its shaded canopy have never woken again.

How long will you dare linger beneath its malevolent shadow?

She Came Back From The Dead

Time, though is moving on, and our London’s most haunted ghost walk moves quickly through a dark passageway to reach an old and haunted house where, on a foggy winter’s night in the 1850′s, an elderly lady returned from beyond the grave to escort her dying sister on her final journey. It is a poignant tale and one that was well attested to at the time.

Oscar Wilde And A Lingering Homicide

Here, during a long ago séance, no less a wraith than the great playwright Oscar Wilde came through to impart a piece of phantom wisdom to the bemused sitters when, by the use of automatic writing, he informed them that “there is nothing more boring in life than death!”

You said it Oscar, you said it!

Next to this hallowed spot there stands an old pub where the reverberations of a long ago murder are still known to echo throughout the corridors in the dead of night. We will fall silent for a moment to allow you to listen for those same echoes, which have also been heard in the dark alleyway in which you will be standing.

A Ghostly Encounter With The Mean Spirited Spectre

On now to the corner outside one of London's most exclusive stores where the ghost of an incredibly wealthy woman once proved that avarice, together with its accompanying grasping traits, can - and in this case did - transcend the grave.

But the highlight of a night in spectral London is edging closer as our nocturnal wander ventures through some truly elegant back streets for an encounter with what is, without doubt, the true highlight of London’s spectral canvas – the most haunted house in London.

What chilling tales the dark walls on which you will gaze could tell if only they could speak!

Tales of those fearless, or foolish, souls who have dared to confront whatever the something is on its home turf only to have their courage desert them when it comes shuffling into the room in the early hours of the morning.

No-one knows, for those who saw it never lived to tell the tale of their fearsome encounter.

They were invariably found dead in the morning, their faces twisted with terror, their eyes -bulging from their sockets – the only testimony to the horror of their final moments spent gazing upon the malevolent entity that came to them in the dead of night.

It is here that our tour of London’s most haunted streets and buildings draws to its conclusion.

But, worry not oh fearless spectre seekers, for your guide will not melt away into thin air – like some of the fickle phantoms featured on the tour.

He will, in fact,  remain here for as long as his services are required to give you directions back to the City of the living, or to suggest a delightful old and haunted pub in which to wind down and recover your composure after your evening spent hunting the ghosts that lurk in London’s most haunted locations.

The tour is currently only available for private bookings.

The London's Most Haunted Ghost Walk can only be booked as a private tour for your office social, tour group, or even as an outing with a difference for a group of friends or relatives.