MANY HAPPTY RETURNS TO BOZ 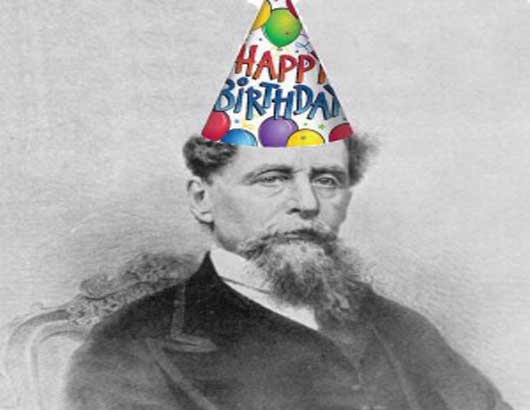 Charles John Huffam Dickens was born on 7th February 1812 and, to celebrate his 204th birthday, Richard Jones, who will be dressed in Victorian costume as a mark of respect to the great man, will be leading his annual "Happy Bozday birthday walk" through the historic streets of Dickensian London.

VELVET SOLES ON YOUR BOOTS

The tour will begin across the road from the timber façade of a 16th century building that is still much as it was when Dickens described it in his last, and unfinished novel The Mystery of Edwin Drood as being a "little nook..the turning into which out of the clashing streets, imparts to the relieved pedestrian the sensation of having put cotton in his ears and velvet soles on his boots.."

Moving on, we encounter a soaring red-brick building that stands on the site of Furnival's Inn, the place where Charles Dickens was living when fame first came knocking at his door, in the form of a portly gentleman who, in 1836, arrived here to make young Charles Dickens (or Boz as he was then more commonly known) an offer that would change his life forever and set him on the road to becoming the World's first celebrity.

It was whilst living here that Dickens met his wife-to-be, Catherine Hogarth, and we will pause to discuss the many birthdays they spent happily together in the years ahead before, in 1857, their marriage broke down and Dickens embarked upon a chaotic period of his life that, he believed, could end his career were it to become public knowledge.

Having ventured into the last twelve years of Dickens private life, we return to the 1830's and join Oliver Twist, Fagin and Bill Sikes in the streets where once stood the notorious rookery where Fagin and his gang were based.

Indeed, you'll even gaze up at the very building that Bill Sikes and Oliver looked up at as they set out on a memorable adventure in Oliver Twist.

WHERE PIP PARTOOK OF POCKET'S HOSPITALITY

Next up, we pay a visit to the "dingiest collection of shabby buildings ever squeezed together in a rank corner as a club for Tom-cats", presided over by a "disembodied spirit" where Pip lodged with Herbert Pocket in Great Expectations.

VIA STREETS AND SIDE TURNS

A definite highlight of this section of the tour is the ancient brick house that was used as a location in Bleak House and which, in commemoration of its starring role in said novel still labours under the name of "The Dickens House."

We then follow in the footsteps of a teenage Charles Dickens on his first day at work to the location where a chance encounter left him with a black eye and torn clothing!

Onwards and forwards we snake our way to a street the very name of which is Synonymous with being in debt, making it the perfect place to discuss the spendthrift ways of Charles's father John, whose financial impecunious ways marred Dickens twelfth birthday and left him with an emotional legacy that remained with him for the rest of his life.

The street is also home to one of London's most glorious Victorian building, a soaring pile of pointed pinnacles and majestic towers that will, quite literally, take your breath away.

Arriving amidst the leafy surrounds of London's largest square, we seek out a 19th century building that Dickens would make the perfect location for lawyers skulls to be placed to enable younger members of the establishment in question to know "how thick skulls may become."

The Old Curiosity Shop was one of Dickens most popular books with Victorian audiences and, snuggled in a nearby side street is the very building which, according to the inscription emblazoned across its front, was the very shop that was "immortalised by Charles Dickens."

Except, and as you will hear, it most certainly wasn't the one that Dickens had in mind.

But, the story of how it came to be acclaimed as such is a fascinating - not to say hilarious - one and you'll most certainly yourself struggling to stifle a hearty guffaw when you hear how its immortalisation came about.

THE HOME OF DICKENS GREATEST FRIEND

Our Dickens Birthday walk will end outside the building where were the chambers of John Forster, Charles Dickens greatest, and most devoted, friend and his primary biographer.

It was to this building that Dickens came in December 1844, having travelled from Italy where he was living at the time, to give a reading of his second Christmas book The Chimes, before an appreciative audience that included several of the greatest artists and writers of the age, many of whom were moved to tears by Dickens rendition of his own work.

It is here, with Dickens memorable description of it from Bleak House - "...in those shrunken fragments of greatness lawyers lie like maggots in nuts" - that the Charles Dickens Birthday walk winds to its close and we bring the curtain down on an exploration of Victorian London liberally peppered with facts and quotes that will have truly brought the streets of Dickensian London to vivid life.

The CharlesBirthday Walk can be booked as a private tour for your office social, tour group, or even as an outing with a difference for a group of friends or relatives.