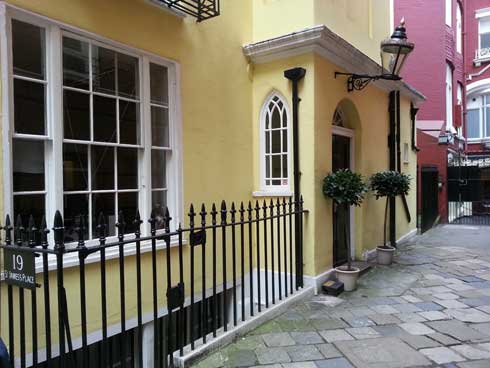 WHERE HISTORY HIDES IN PLAIN SIGHT

There can be little doubt that the London village of Clerkenwell is an enchanting enclave and to walk its streets and alleyways is an absolute delight.

Our Clerkenwell Walk begins with London’s only surviving Tudor town house, which gazes down onto the melancholic spot where victims of the 1348 Black Death lie buried.

Your guide will tell you the story of how the plague came to London with devastating effect and how a Norman nobleman commandeered an area of ground, outside the City, in which to bury its hapless victims. In 1381 he founded a monastery so that the monks might pray for the souls of the dead. That monastery flourished until, in the reign of King Henry V111, it was dissolved, after whch it passed through the avaricious grasp of several Tudor nobles until, in 1611, it became a famous school and a retirement home for gentlemen.

Needless to say, with its eclectic mix of monastic and noble history the building has a rich and varied history and your guide will fill you in on all the twists, turns and subterfuge to which its ancient walls have borne witness.

From here our tour of Clerkenwell meanders its merry way through a delightful medley of back streets and alleyways, each of them steeped in history, to arrive at the magnificent splendour of London’s only surviving medieval gate. Oh, what tales its time-worn stones could tell if only they could speak. Tales of monks and crusaders; of Shakespeare and the great Dr. Johnson; of Dickens and the origins of one of this country’s most august institutions.

Although the walls themselves might remain mute, your guide will step nimbly into the breach to regale you with tales galore about this splendid landmark of bygone London.

Having found our way across a busy main road, our walk around this historic quarter delves deep into the hinterland of the village of Clerkenwell to confront you with some of the famous characters and notable events from its past.

You’ll see the Clerks Well from which the village’s name was derived. You’ll stand outside the police court at which Charles Dickens had Oliver Twist appear before the irascible Mr Fang. You’ll learn about the modesty boards that were incorporated into the staircase of the village church to stop gentlemen seeing up the ladies skirts as they ascended the stairs!

And, in addition to all this, you’ll be privy to a delightful mix of gossip, history and facts on which you’ll be dining out for years to come.

No? Don’t worry you’ll know the answers to these and many other priceless nuggets of information by the time you reach the end of our Clerkenwell walk.

So, if you want to explore the streets, passageways and ancient buildings of a quarter of London that is totally unique in both appearance and character and which, despite being a mere stone’s throw from the soaring dome of St. Paul’s Cathedral (of which you’ll get some terrific views as you walk) then join us for a tour of the secret village of Clerkenwell, and prepare to be intrigued and informed, amused and amazed with every corner turned