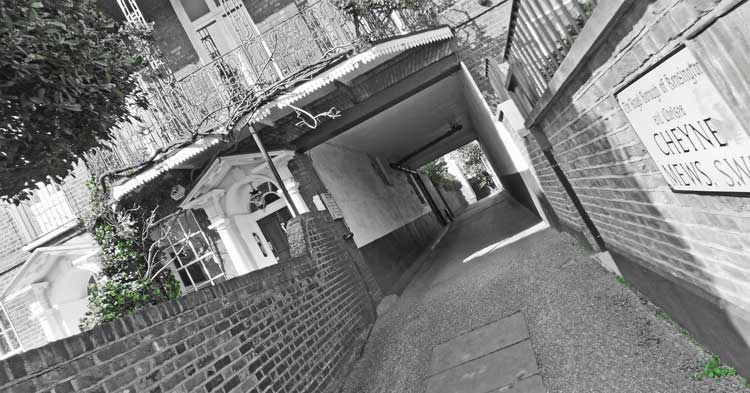 Chelsea is very much London’s bohemian village. To walk its streets, and to delve into its picturesque squares and mews, is to walk in the footsteps of a host of colourful, and famous, figures both past and present.

From Oscar Wilde To Mick Jagger

Indeed, the cast of colourful characters encountered on our Chelsea Walking Tour is, to say the least, truly impressive. Oscar Wilde, A.A Milne, Bram Stoker, Dante Gabriel Rossetti, Laurence Olivier, Vivien Leigh, Henry James, Mark Twain, Judy Garland, Mick Jagger, Keith Richard’s, Eric Clapton and The Beatles, are just a few of the residents whose bohemian abodes you will encounter on this hugely enjoyable and informative troll through an area that is, genuinely, crammed full with surprises.

Add to all these famous names the graceful splendour of Sir Christopher Wren’s Royal Hospital, home to the world famous Chelsea Pensioners, the leafy square where James Bond’s pad was located, and the shop from Punk Rock pogoed its way spitting and swearing its way into the international consciousness, and the stage is set for a truly memorable walk that will keep you enthralled and amused throughout.

The Chelsea Walk begins with a stroll along King’s Road, the epicentre of Swinging London in the 1960′s.Lining it are a series of wonderful leafy square where, despite their proximity to one of London’s busiest shopping streets, the slower pace of a more genteel and bygone age still manages to hold sway.

Here you will encounter the former homes of the likes of Henry James and A.A Milne, whilst you guide will, surreptitiously, point out the London base of 007 himself, James Bond.

From here the walk will wend its merry way via one of London’s grandest avenues to take in the breathtaking vista of Sir Christopher Wren’s Royal Hospital, home to the renowned and redoubtable Chelsea Pensioners, one or two of whom – resplendent in their bright scarlet tunics – we will, no doubt, no doubt, encounter as we weave our way through the streets of Chelsea.

Next up is the house of Bram Stoker, creator of one of literatures most enduring bloodsuckers, Dracula. Your guide will regale you with the salacious details of how Stoker came to breathe life into this infamous figure of the undead and reveal the identity of the famous actor who may have, in part at least, inspired him.

For a bit of light relief from the Chelsea’s vampire horrors, we will move on to see the picturesque cottage to where Laurence Olivier and Vivien Leigh set up home and where fellow actor, Ralph Richardson, almost brought the house down one long ago bonfire night!

The Famous and the Famouser!

Then we’re off into a wonderful warren of back streets and mews to make the acquaintance of a veritable Who’s Who of Chelsea Residents both present and past. Anybody who’s anybody, and one or two nobody’s, will find their way into this section of our tour. Oscar (I wish I’d said that) Wilde; James (you will Oscar, you will) Whistler; Mick (I Can’t Get No Satisfaction) Jagger; and Keith (I Can’t Remember) Richards; are just a few of those whose stories you will hear as you stand outside their former homes.

Add to these the studio where the cover for one of the world’s most iconic album covers – the Beatles Sergeant Pepper’s Lonely Hearts Club Band – was photographed, and the second oldest botanic garden in the country, a place which, incidentally, helped change the course of American history.

Hearth and Home To Famous Writers

We then set of to encounter a medley of residences that were hearth and home to several literary luminaries.

These include the house to which the author Mark Twain retreated to avoid his creditors; the almost unchanged, and un-modernised, home of Thomas Carlyle, the Sage of Chelsea; the house in which the novelist George Eliot died; the house where Dante Gabrielle Rossetti’s bohemian lifestyle both outraged and frustrated his neighbours; and the former home of the great Tudor statesman Sir Thomas More, the man for all seasons, and you can see why Chelsea is such a fascinating place to visit and discover.

So, if you want to enjoy a walk through London’s most picturesque and enchanting riverside enclave whilst, at the same time, coming face to face (in narrative at least) with some of London’s most celebrated, famous and infamous residents, of the past and of the present, then join us for a magical mystery tour through the delightful and picturesque streets of the wonderful village of Chelsea.

Far End of King's Road, a short bus ride or a 20 minute walk back to Sloane Square, longer if you decide to do a bit of window shopping en route!