THE HISTORY OF BUCKINGHAM PALACE 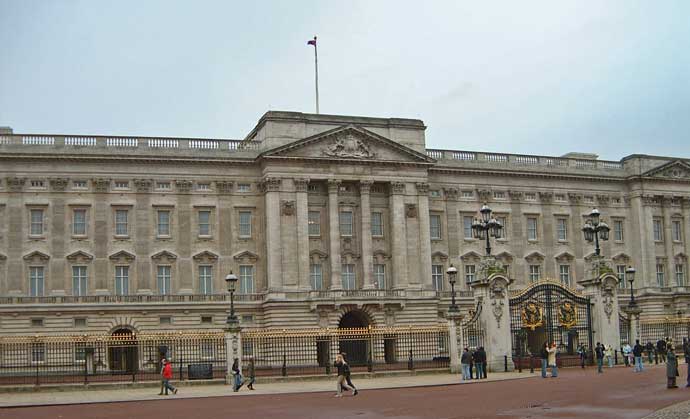 Buckingham Palace has been the official residence of the British Monarch since the beginning of the reign of Queen Victoria in 1837.

Its origins, however, date back to the early 1700′s when William Winde built Buckingham House for John Sheffield, Duke of Buckingham, in whose family’s possession it remained until 1761 when George Ⅲ purchased the house as a residence for his Queen, Charlotte.

Shortly after he ascended the throne, in 1820, George Ⅳ decided to convert his mother’s residence into a palace worthy of a King of England and employed the services of the architect John Nash to make his dream come to fruition.

The Government of the day duly allocated the sum of ‘not less than £200,000′ for the ‘repair and improvement’ of the King’s house, and Nash set to work to turn Buckingham House into the King’s dream home.

It soon became apparent that George’s and Parliament’s ideas as to what constituted ‘repair and improvement’ were greatly at odds. The King was determined to have a totally new palace, which he wanted built from expensive Bath stone, and, although Nash retained the shell and much of the plan of the earlier house, what gradually appeared was far in excess of what Parliament had originally envisaged, both physically and financially.

With the set budget being far exceeded, the new Buckingham Palace became subject to a barrage critical hostility. Thomas Creevey visited it in February 1827 and promptly condemned it as the “devil’s own”.

In 1828 John Nash went to see the new Prime minister, the Duke of Wellington, to ask if the government would bear the cost of demolishing and rebuilding the palace wings, which George Ⅳ didn’t approve of. He received short shrift from Wellington. “If you expect me to put my hand to any additional expense,” was the Duke’s reply, “I’ll be damned if I will.”

But the rebuilding project, now well under way, could hardly be abandoned and, as work continued, the expenditure gradually crept towards the £700,000 mark.

George Ⅳ never lived to see his dream palace come to fruition and, following his death in 1830, his brother, who succeeded him as King William Ⅳ, was reluctant to live there, preferring nearby Clarence House instead.

Parliament, however, wanted the King to live Buckingham Palace, since it had cost the state so much money, and an unofficial stand-off ensued. In 1834 the then Houses of Parliament burnt down and William, sensing an opportunity to avoid being forced to move into a palace that he had little affection for, offered the building for use as a meeting place by Parliament. The politicians, however, saw through his ruse and declined the offer.

As it happened, William never came to live in Buckingham Palace, due to the fact that death intervened on his behalf and he died in 1837.

The First Monarch to
Reside at Buckingham Palace

His successor, Queen Victoria became the first Monarch to actually reside at the newly completed palace, moving in with her husband, Prince Albert, and here the Royal couple set about starting their family.

As a family abode, Buckingham Palace left a lot to be desired. The drains proved faulty, there were no sinks on the bedroom floors, many of the buildings 1,000 windows would not open, bells failed to ring, doors wouldn’t close and – as if this litany of faults wasn’t sufficient to see the Palace featured on an episode of Builders From Hell – hardly any of the toilets were ventilated.

Notwithstanding the faults, Nash’s successor, Edward Blore, gradually improved the palace and, by 1843, Queen Victoria was sufficiently fond of it to confide to her diary, when leaving for another royal residence, “I have been so happy there”.

In 1847 Blore completely enclosed the courtyard by adding what an east façade.

The King Was Not Amused

Her son, Edward Ⅶ, was equally fond of the building, a fondness not shared by his son, who became King George Ⅴ in 1910. “The vast building,” he wrote in his memoirs, “with its stately rooms and endless corridors and passages, seemed pervaded by a curious, musty smell that still assails me whenever I enter its portals. I was never happy there.”

In 1913, Blore’s east façade was replaced by a new front designed by Sir Aston Webb. This is today, the most readily recognisable section of Buckingham Palace, including as it does the famous “waving balcony” on which they Royal family appear following important occasions, such as the wedding of Prince William and Kate Middleton on 29th April 2011 and the current Queen, Elizabeth Ⅱ′s, Diamond Jubilee in 2012.

Beyond its façade Buckingham Palace has an impressive 775 rooms which, between them, contain 1,514 doors and 760 windows, which are cleaned once every six weeks. Amongst the rooms are 19 State rooms, 52 Royal and guest bedrooms, 188 staff bedrooms, 92 offices and 78 bathrooms. To ensure that the everyday running of the palace goes like clock work there are over 350 clocks inside the palace.

How To Tell If The Queen Is In Residence

You can tell if the Queen is in residence by the type of flag that flutters over the palace. When she is home the Royal Standard is flown. This consists of four quarters - two for England (three lions passant), one for Scotland (a lion rampant) and one for Ireland (a harp). When she is not in residence the red, white and blue Union Flag flies instead.

Open To The Public

Buckingham Palace is normally open to the public during periods when the Queen is not in residence. This is mostly during August and September, although in recent years it has also been opening for exclusive tours over the Christmas period.

Click Here to go to their on line booking page.