CHRISTMAS MUST BE COMING

There are certain tell-tale signs in London that make you suddenly aware that Christmas is, once again, just around the corner. Shops and pubs start putting their decorations up in late October. The Christmas lights in the West End go on in early November.

But then the biggie happens. The Christmas Tree goes up in Trafalgar Square, and you start to realise that yet another year is almost over.

At, more or less, the same time of the year that the Christmas Tree goes up in Trafalgar Square a lesser known ceremony - the annual Boar's Head Ceremony - takes place over in the City of London, and this one is a true gem when it comes to quirky and unusual London traditions. 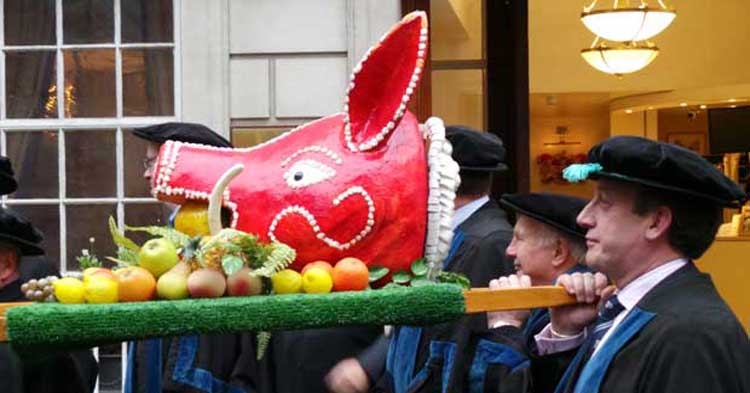 Tucked away in Bartholomew Close, just off Little Britain, you will find Butchers Hall, one of the City of London's Livery Halls which, as the name suggests, belongs to the Worshipful Company of Butchers. 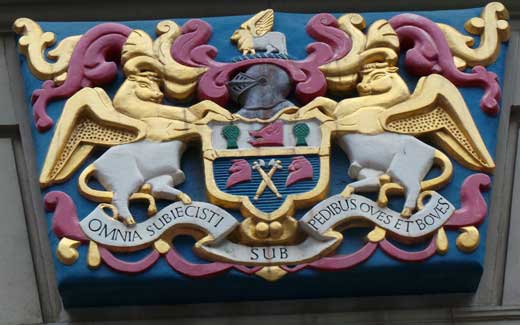 The Butchers are one of the oldest of the City's Livery Companies, and there are records of them stretching as far back as 975AD.

Their Coat of Arms was granted in 1540 and their motto is "Omnia Subjecisti Sub Pedibus, Oves et Boves"- meaning "Thou hast put all things under his feet, all Sheep and Oxen." Their Charter of Incorporation was granted by James I in 1605.

TRADITIONS OF THE CITY OF LONDON

The City of London has numerous arcane, whimsical and intriguing annual ceremonies that, although not particularly well publicised, are, none the less, well worth attending.

Indeed, it could be argued that the very fact that many of these ceremonies aren't promoted with the fanfare that greets so many events in London, makes witnessing them truly special, if only to see the bemused look on the faces of passers-by who chance upon them and don't have the foggiest idea what's going on! 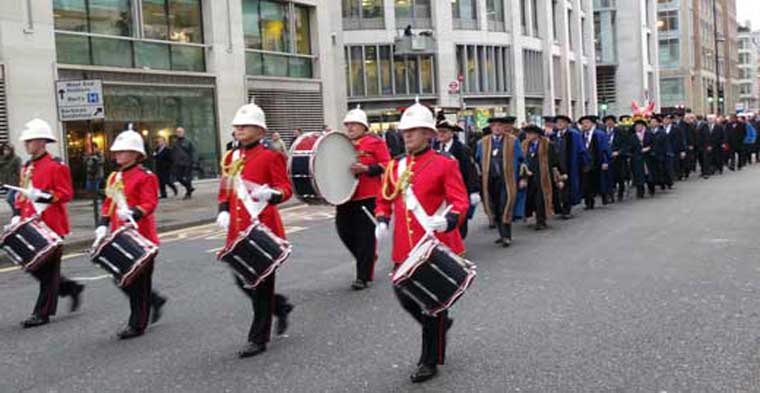 One such tradition is the annual Boar's Head Ceremony which takes place in early December, very early on in the new Lord Mayor's year in office.

In essence, the Worshipful Company of Butchers, resplendent in their fur-trimmed robes, process from their hall in Bartholomew Close and make their way, via Cheapside - led by a by a troupe of drummers, accompanied by a posse of police outriders and followed by sundry hangers-on who have turned out to participate in the elaborate occasion - to Mansion House, the home of the Lord Mayor of the City of London. 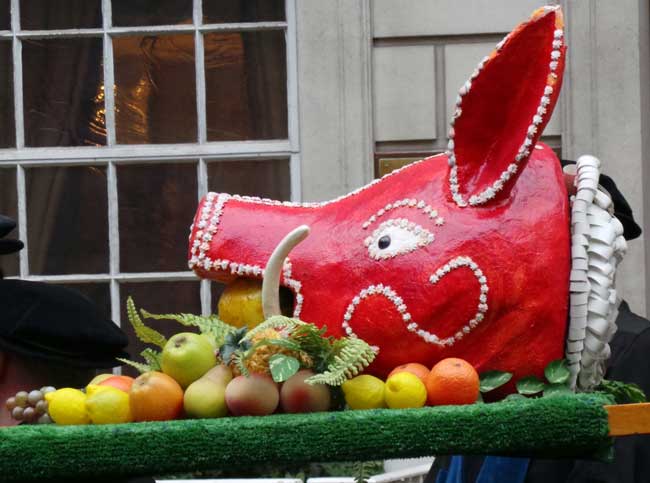 The centerpiece of this colourful street pageant is a glorious boar's head - or in recent years, owing to the restraints of health and safety, a papier maché model of a boar's head - which, on arrival at Mansion House, is presented to the Lord Mayor, where a real boar's head has already been sent on ahead to be devoured by sundry City dignitaries at a festive feast to which the common folk are not invited!

It all looks rather wonderful and has a delightful air of festive eccentricity about it.

ONE OF THE CITY'S OLDEST TRADITIONS

This quirky ceremony is, most certainly, of ancient origin, and its roots can be traced back to 1343, when John Hammond (a grocer) was the City's Lord Mayor. 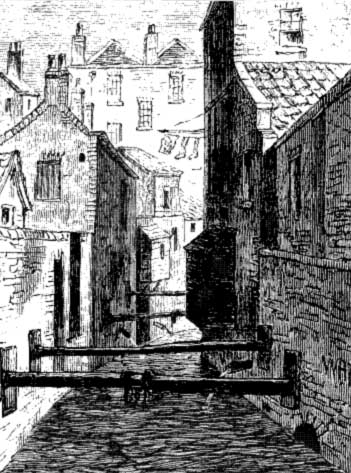 The butchers in the parish of St. Nicholas at the Shambles had got themselves into a spot of bother in that they had managed to offend the sensibilities of the monks at the Greyfriars Monastery by discarding their "offal and ordure" on the public highway, to the great inconvenience and annoyance of the pious friars who, as a result, were finding it difficult to pass along the streets unhindered.

The monks, deciding that enough was enough, made an official complaint to the City authorities and, on the 12th March 1343, the City granted the butchers "...a parcel of land in Secollane adjoining the Flete [the Fleet River], for the purposes of cleansing the entrails of beasts in the said water" and, having done so, they could "dispose of the offal in the Flete Ditch', which was unflatteringly described as being "the vilest of all abominations which London then contained."

And the cost to the butchers?

Well, the records set it thus:- "...for which said butchers to repair and maintain a certain wharf, they and their successors, for ever, rendering yearly to the Mayor of London, at Christmas, a boar's head."

The cost of this annual stipend was to be met from the funds of the Butchers Guild. Indeed, one of the earliest records to survive in their account books notes, "Pd. For a boar to my Lord Mayor £1.4.0d."

Despite the fact it's been many years since they actually washed any beast entrails, nor, for that matter, disposed of any offal in the abominable waters of the River Fleet, a contract is a contract - and so the butchers, adhering to the "for ever" clause in that 1343 agreement, continue to pay up every December, despite the passage of almost 700 years. How's that for continuity!

A CEREMONY WELL WORTH ATTENDING

The annual Boar's Head Ceremony is well worth witnessing as it gives you the opportunity to see one of the City of London's most ancient traditions up close and personal.

Better still, just imagine the bemused comments from friends and family on Facebook or Twitter as they ponder the massive, and elaborate boar's head that will, no doubt, take pride of place on your page or tweet once you have become privy to another of the City's wonderful ceremonies.

The Boar's Head Ceremony has now been delayed until January, 2020. No date has yet been set. I will post full details when they become available.

This might change so be sure to check back a week or so prior to the event.

The procession itself will set off from
Butchers Hall at just after 3.10pm.
However, I always suggest arriving around 2.50pm as the build up to the procession is always great fun!

The procession will end at Mansion House
next to Bank Underground Station.

Setting off from Butchers Hall, the procession wil make its way along King Edward Street, turn left along Newgate Street, keep ahead along Cheapside and then keep straight into Poultry and right into Walbrook to arrive at Mansion House.