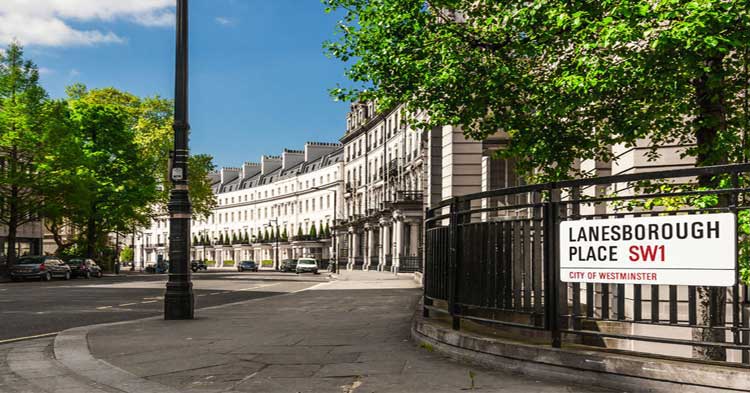 WHERE THE HAVES COME TO HAVE IT

Belgravia is one of London’s most exclusive neighbourhoods. It’s posh with a capital P and it’s properties are some of the most expensive in the world with prices rarely dropping below the £11 million mark, and often creeping up to £15 million and over.

Homes of the Super Rich and the Mega Famous

It is, therefore, little wonder that the houses we pass on our Belgravia walk are, and always have been, the abodes of the rich and the famous, the haves and the have-more’s. Indeed, the district residents, both past and present, are a glittering cast of aristocrats, film stars, rock stars, business magnates, colourful entrepreneurs, secretive oil tycoons, with the occasional Russian oligarch thrown in for good measure!

In the 18th century the area was little more than a waterlogged and swampy wasteland. Known as the Five Fields, it was a notorious haunt of thieves and highwayman and respectable citizens travelled through it at their peril.

Enter The Duke of Westminster and Thomas Cubitt

But then, in the 1820′s, George 1V developed Buckingham Palace, and the Grosvenor family – who owned the Five Fields and which just happened to lie immediately to the west of the palace grounds – saw an opportunity to make their wasteland profitable and commissioned the builder Thomas Cubitt to turn it in a grand estate of soaring houses that would afford the aristocracy the opportunity to live as close to the monarch as it was possible to get without camping out in his back garden.

Making use of the thousands of tons of soil that had been excavated in the creation of St Katherine’s Dock to the east of the Tower of London, Cubitt levelled and heightened the Five Fields and created a medley of elegant streets and grand squares lined by soaring, white terraced houses which Robert, the first Marquis of Westminster and the head of the Grosvenor family, named Belgravia after the village of Belgrave, which was close to the family’s main country seat, Eaton Hall in Cheshire.

Thus the seeds were sown for our poshest London walk which explores the streets, squares and crescents that stand as a testimony to the ingenuity of the builder whom Queen Victoria dubbed “clever little Mr Cubitt.”

Highlights of the Belgravia Walking Tour

So join us for an enjoyable and informative walking tour through the streets, mews, squares and crescents of London’s most exclusive neighbourhood and feast your eyes on some of the world’s most expensive real estate and allow your guide to answer the question who lives in a house like this?

The tour ends on Sloane Square.