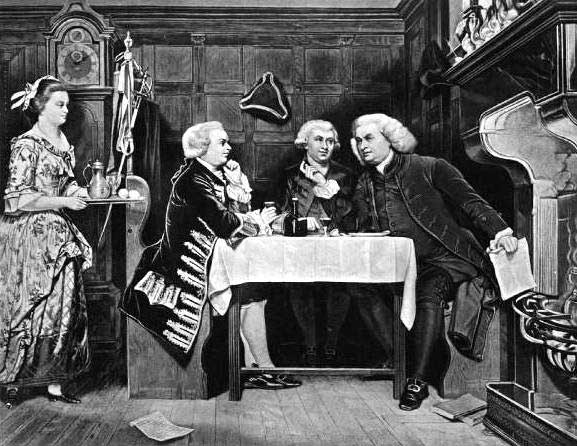 This is very much a walk for adults only and, for that matter, broad-minded adults with a sense of humour. Because you’re going to discover that London’s history is far from pure and unsullied.

Indeed, Londoners have always known how to party and so, on this walk, you’ll get in on their fun and embark upon a veritable cavalcade through four hundred years of sinful shenanigans.

Now, before we go any further, it should be stressed that we are not talking gratuitous filth here, because that’s just not our style.

Instead, we are talking about turning over the rock of history to leave you pleasantly surprised at what (or even who) comes crawling out from underneath.

In short we’ll shine a light into bygone London and catch intriguing glimpses of some famous, infamous and long forgotten figures blinking in its beam.

You’ll guffaw aplenty at the antics of James Boswell in the dimly-lit alleyways around Strand and Covent Garden. You might be taken aback at what went on inside Prissie Fotheringham’s lauded Chuck Office, and we won’t be responsible for your reaction to the sordid mischief exposed by Ned Ward, the 18th Century’s Egon Ronay of London’s brothels.

Charles Dickens makes a surreptitious appearance, as does King Edward V11 at his celebrated “table for two.”

The great lexicographer Dr. Samuel Johnson lurks in the wings before strolling into the limelight to deliver one of the greatest theatrical put-downs of all time.

You’ll positively roar at the escapades of the world’s worst ever actor, and laugh your socks off at the caustic witticisms of Oscar Wilde, Noel Coward, George Bernard Shaw and Winston Churchill.

To give you plenty of time to catch your breath and fully digest all the salacious morsels with which we will adorn the table of time, we’ll even make stops at several historic pubs, where there’ll be time aplenty to enjoy a drink.

However, these pubs all have their own dark secrets that they would rather were kept hidden from prying eyes. But they reckoned without our forensic determination!

He Wrestled The Chicken

So, we’ll take you to a backstreet boozer where a renowned prize fighter once wrestled the chicken; we’ll sneak past the ancient tavern outside which a famous poet was once given a sound thrashing for lampooning his betters; and we’ll end our evening with a visit to the pub where a famous actor created a haven for men whose wives forbade them to sing in the bath!

The tour ends at the Coal Hole on Strand.